Excerpts from The Journal of Narcissa Malfoy (nee Black) 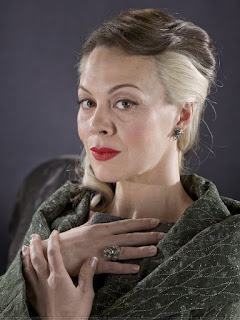 This is a work of fan-fiction, none of the characters belong to me. If I have made any mistakes or changes to character's lives please do not be offended.

I wanted to imagine the backstory of Narcissa Malfoy, who is clearly a loving mother but spoiled her child, and how being brought up by parents with pure blood ideals might have influenced her life.

I thought it was interesting that one of her sisters was one of the most evil people in the Death Eaters, while the other was good and kind and cut off by her family. Maybe the third child was a little in between the other two.

Yes, I did also include a reference to Sirius being a bully, it cannot be denied that Sirius and James were kind of little monsters in school but they matured eventually, maybe others did too...

And don't forget, whatever her reasons, she did lie to the dark lord about Harry being alive, and did everything to protect her son.

In case you were wondering, I am Hufflepuff. Puffpride!

Excerpts From The Journal of Narcissa Malfoy (nee Black)

I have started writing this diary as a way to record of my life. My mother gave it to me for my birthday. My mother says I am serious and bookish for my age. My sister Bellatrix says I am a drip and a weakling. I have to hide this diary from her so she does not tease me, or worse.
I love Bella, as you should love one's sister, but she terrifies Andromeda and myself, and we never dare tell our parents the things she does. She is very gifted for her age and our parents adore her, they have no idea that she puts frogs and spiders in our bed, conjures our bath water scalding hot or icy cold and all number of other nasty things.

Today our cousins came over to play. I like Regulus, who is quiet like me. He told me his brother Sirius bullies him too. Sirius is a lot like Bella, loud and with a rather cruel streak. He and Bella were laughing a lot together and Regulus and I hid, which was a good idea, because later my aunt and uncle were apologising to mother and father for Sirius turning Dromeda into a flobberworm. Dromeda was crying, there was dirt all over her. Mother and father just shrugged and said children will be children and that Sirius was very talented. I think I need to start practising some charms to use on Bella if she ever threatens me.

Well, I did it, I turned Bella into a bat. Actually I haven't quite worked out how to turn her back yet, she's roosting in a tree outside my window yelling at me, and mother and father are furious she hasn't turned up for dinner. Maybe things are looking up.

Finally, it's my turn to go to Hogwarts! Sometimes it is really miserable and lonely being the youngest child! For years I have been hearing about this wonderful place that my sisters go away to for most of the year. I have missed them, even Bella! Dromeda says the best thing about Hogwarts is getting away from mother and father, and I have to admit, I find their company stifling sometimes. Plus we live so out of the way here, and our parents have so few friends, there aren't really any boys my age for me to associate with. I would really like to meet some boys.

There is so much about Hogwarts that no one told me! Cousin Sirius is in Gryffindor house, even though my parents told me all Blacks are sorted into Slytherin. I'm glad Sirius isn't in my house, I've run into him and his friends already and they seem very unfriendly. They make it their business to bully those weaker than them, like my sort of friend Severus. Severus is from a pure wizarding family but he is very poor and people are unkind to him. Also he is always associating with a Gryffindor girl, Lily, which seems to annoy people in both Gryffindor and Slytherin. Sometimes Severus helps me with my potion making, he is very talented, but a lot of the time he just sits by himself, mooning over Lily.

Bella has her own gang, of course, although to my surprise, she is not actually the leader. A mysterious older boy called Tom Riddle, who has apparently already graduated is their leader. Bella says I am much too immature and pathetic to know too much about what the group is up to. I find them mysterious and a little scary. There is a boy in the group who is so beautiful, he has never noticed me, of course. His name is Lucius, he has white blonde hair and patrician features. He's a year above me and he is probably the best looking boy I have ever seen. I really wish he would notice me. But who would ever notice me when Bella is around with her all dark energy and beauty? I'm just a skinny little nobody.

A secret, diary, that no one must find out, especially not Bella or my parents, there is a rumour that Dromeda is seeing a boy from Hufflepuff. Bella would go insane! Everyone knows there are a lot of muggle borns in Hufflepuff!

Well, almost overnight, I grew three inches and finally got a décolletage. I had to go to Madam Pomfrey who gave me a charm to refit my robes, which were stretching in all the wrong ways. On the bright side, boys are finally noticing me. A Ravenclaw boy asked me to the Quidditch game but I had to tell him I wasn't allowed to date muggle borns. He got really angry at that, even though I was just being honest with him. Mother and father would kill me!

Finally! Lucius asked Bella about her "friend", that's me, diary. She probably said a lot of disparaging things about me, but I don't care. He is interested in me! In me!

It's lonely here with Lucius, I find myself counting the days until we can be together again. He sends owls, of course, but it's not the same as sitting with him by the lake or going to balls together. And he's always with Bella and their group, I know I should trust him, but who can trust Bella? She says Tom is the only man for her, but how long until she grows sick of him not wanting more than friendship? No, I have to trust Lucius, he loves me, and he says I am so much more beautiful than Bella. He said as soon as I finish school we will be married and have the most beautiful pure blood children. I said I wouldn't even care if he wasn't pure blood, but that seemed to insult him and I had to apologise.

Terrible news! The rumours about Dromeda were true! Apparently her muggle born boyfriend turned up at my parents' house asking for permission to marry her? My father threatened his life, and the boy fled, Dromeda along with him. I have been forbidden to speak to her ever again. I don't know how to feel about any of this. I miss my sweet, gentle sister, but I was raised to believe that pure blood families should never mix with the impure. In the end, it doesn't matter what I think. My parents' word has always been law and I have never been strong enough to fight them.

Years have passed since I last wrote in this journal. I found it by chance going through some old boxes. How much has happened since then. Lucius and I were married, and for a time we were blissfully happy. It seems strange to think of that time, now. These days, he spends all his time with the group that now calls itself the Death Eaters, in which Bella is still a key member. They tell me nothing of what goes on, Lucius tells me to just worry about taking care of our child.

Draco is the love of my life, he means more to me than I would ever have thought. I admit, I do indulge him a little too much, as does his father. But he is the only link between us now.

In the past, I dreamed of having a while brood of beautiful children, but that is unlikely now. Lucius and I are practically strangers to each other. I sense that I am a disappointment to him. I never waver from the values that he, Bella and my parents share. I cut off contact with Dromeda, I associate only with other pure bloods, but I feel lost and lonely.

I don't think writing any of this down helps at all.

I have made a lot of mistakes in my life, I freely admit that. I shouldn't have listened so much to my parents, shouldn't have cut off contact with my sister Andromeda, should never have married Lucius or spoiled Draco the way I did. But what is the point of looking back at things you cannot change?

Draco turned out alright in the end, and I would like to think I had a little to do with that, but I think really he had something in him that neither his father or I did. Under that rather spoiled exterior, there was some integrity in him. In the end, he married a sweet girl named Astoria, and their exemplary life has helped remove some of the shame of this family. Their son, Scorpius, is a sweet child, and they have been almost strict in making sure he is not spoilt the way his father was.

Lucius cannot stand Astoria, only one of the many reasons we no longer live together. We tried to make it work as a family after the final war, but Lucius could not leave behind his ideals and his shame, and in the end, Draco and I are glad not to see too much of him.

I live in a humble little cottage not far from my grandchild, and I am happy, possibly for the first time in my life. It may sound pathetic to say it, but I don't care. Better to find my true happiness late in life than to be forever lost in misery and self obsession, as I think my former husband is.
Posted by Laura Morrigan at 01:31