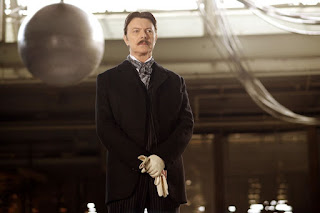 Bowie as Tesla in The Prestige 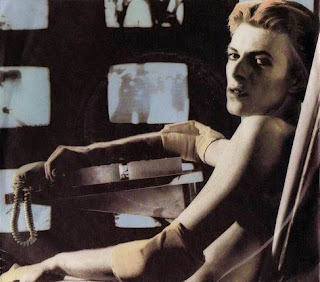 As Thomas Newton in The Man Who Fell To Earth

I have not seen all of Bowie's films, but here are a few that are worth a watch. There are definitely a few others of his I need to try and see! I am also desperate to see the stage play Lazarus that he wrote, but unless it ever comes to Australia or is filmed, my chances are low.

The Man Who Fell To Earth: I read about this in a book about terrible movies and I couldn't believe it was in there. It sounded brilliant. It is a rather slow, melancholy and rambling film, what I would refer to as an Art film, and may not be everyone's cup of tea. You do see a naked Bowie though, and I thought his acting was beautiful. It is a sad film so it might not be best to watch yet if you are still bursting into tears at Bowie tribute articles.

Interesting fact: Lazarus, the play that Bowie wrote, is apparently a sequel to this. Michael C Hall plays Thomas Newton, and Bowie chose him for the role.

The Prestige: Even without Bowie this movie would have been brilliant, with elements of science, stage magic, vendettas and Steampunk. Bowie as Nikola Tesla is the icing on the cake. Not a large role but an unforgettable one.

Zoolander: David Bowie has a small cameo as himself. The movie itself is sometimes very funny, sometimes rather offensive, and a humorous take on the fashion world, with some good cameos.

Basquiat: While director Julian Schnabel has been criticised for including a thinly veiled version of himself (played by Gary Oldman, complete with Schnabel's artwork and real-life daughter), this movie is unmissable in my opinion. I have always loved this depiction of artist Jean Michel Basquiat's early career. It is great to see Jeffrey Wright when he was young, before he became a Bond character and recurring antagonist in Boardwalk Empire. His portrayal of the political but naive Basquiat is beautiful and touches on the now commonly held belief that Basquiat was possibly ripped off by his agents.

I have seen many well known actors play Andy Warhol, Jared Harris (in I Shot Andy Warhol, also a great movie) and Guy Pierce (in Factory Girl) but I will always love Bowie's portrayal of him best.

Labyrinth: This movie was a huge part of most people's childhoods, and a lot of us still wish the Goblin King would take us away. Bowie wrote some beautiful music for the film and is ethereally beautiful in his wild costumes. While his character is just a little sociopathic, nearly killing the protagonist off one moment, wanting her to be his queen the next, there is no denying he is totally magnetic and irresistable! I really feel like watching this again but am not sure if I am quite ready!

The Hunger: David Bowie's character is absolutely beautiful as an ancient vampire, a Goth's dream boyfriend. And Catherine Deneuve as his wife and sire is damn irresistible, too. Unfortunately, fairly early into the film, Bowie's character begins dying. I know people who had trouble handling his demise in this film while he was still alive so I would not recommend watching it if you are still feeling raw.
Posted by Laura Morrigan at 16:58