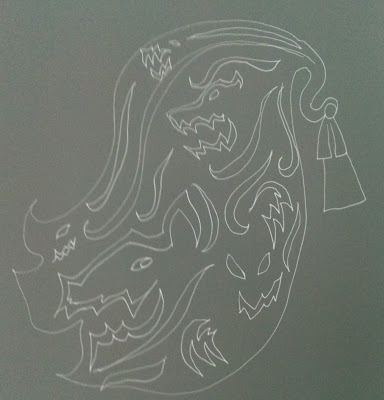 
There was once a girl who was very beautiful. She had red lips, skin as brown as a hazelnut, and long hair as black as ink. This was very inconvenient for her, as men were always asking for her hand in marriage and she just wanted to be left alone. All day, all night, men were hammering on the door of her cottage, telling her they loved her because she was so beautiful. They didn't even bother to find out anything about her, what she liked to do or what her name was. They just wanted her because she was pretty.


So this girl built a tower. She built it seven stories high and then bricked up the door from the inside. In this tower, the men could not reach her. The walls were high and impossible to climb. She was free to do as she liked. She would haul up supplies on a bucket from the high window, a young girl from the village would bring them for her. She learned to cook gourmet meals just for herself, she read, and best of all, she could sleep uninterrupted by men banging at her door demanding they marry her.

The ink-haired girl slept, she slept for a long, long time. While she slept, her hair began to grow. It grew like a waterfall of darkness, out of her window, down to the ground. Most people were scared, they spoke of witchcraft, and the images they seemed to see dancing in her hair. But one man was not put off.


When he heard of what had happened, he rode at once to the tower. He grabbed hold of the end of the long black hair and pulled as hard as he could. The girl was yanked out of her bed, out of the window, to fall into his arms.


No one would listen to what the girl said about wanting to be left alone. What woman wanted to be left alone, with no man to keep her company? They insisted that the man had saved her from the tower. She found herself pushed into the church by the crowd of people, the priest happily announcing them man and wife.


Back in the man's house, the girl cried and cried. The man was angry. She should be grateful for his love. He hit the girl across the face.


Then something strange began to happen. Her ink black hair began to move of its own accord. It reared up before him. Things seemed to move among the hair. An ink-black bear, a dark wolf, and other creatures, too many to name.


The next day, they found the door of the cottage open. The man was dead, carved up by animal claws. There was no sign of the girl and they decided she had been eaten by whatever creature had attacked her husband. They said it was sad, they would have made a lovely couple.


They did not know that in the forest, the girl was walking, on her way to find a place where she would be left alone to truly be herself. To choose her own destiny. She was not afraid of being followed, because she knew that her magical hair would protect her.


Many years later, that girl did find her place. She had her own little cottage, and she wrote wonderful stories. All the village children loved her and brought her food and presents. She was older, no longer beautiful, and men left her alone. While her hair sometimes still growled in its sleep, it no longer needed to protect her.

Email ThisBlogThis!Share to TwitterShare to FacebookShare to Pinterest
Labels: art, fairytale, my writing