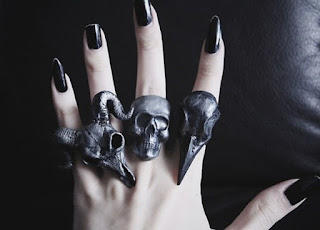 Day 26 – Show a photo for every year (or month if you’re new) that you’ve being into Goth.
I don't know if I have that many good pictures. I may do a post on this in the future if I ever find any. I didn't used to be hugely into taking photos when I went out.


Day 27 – The worst thing you ever did to a newbie.
I never did anything bad to a newbie, I am not like that. I may have laughed at bad fashion choices behind people's backs when I was very young and callow, but lets face it, I still judge anyone who makes bad fashion choices in any culture although I will not publicly call them out.


Day 28 – Do you consider yourself an eldergoth?
I am definitely pretty knowledgeable about the music, history of the culture and the various films and books inspired by the Gothic genre, and have done a lot of reading both on the cultural movement created by the music and the genre. At the moment elder Goth seems to mean a Goth over 30, so I am not quite there yet, at this point it also means someone who was around in the earlier days of the movement, which I unfortunately was not. but I think I will maybe be able to be considered an elder goth at 30. we will see.


Day 29 – What do you think will happen to Goth in the future?
It has already influenced and been influenced by Cyberpunk and Steampunk. I don't think it will ever stay static but continue to change to stay alive as most cultures have to.


Day 30 – Make a list of blogs you regularly read and link to them.
See my sidebar.
Posted by Laura Morrigan at 00:16