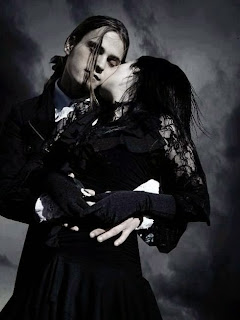 Day 10 – What do you hate and love about the subculture? 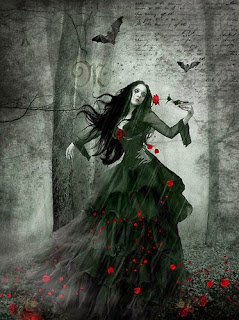 I love some of the amazing people who are creative and friendly. I love starting to talk to someone and being able to say, "me too!" about weird things you thought only you did and liked. I really like how Goths generally have a healthy attitude to death, can laugh at dark humour about it and take the fear out of it. I love the idea of the memento mori reminding us to live life to the fullest while we can. I also love how good I look in black :P

I hate that there are still some people around who feel they have to be "Gother Than Thou", most Goths know how to not take themselves too seriously, but there are always those who want to make you feel inferior because you don't have the money for the fancy clothes, or you don't fit their stereotype of what a Goth should be. Generally most harassment I have seen seems to take place online, which is pretty common in any groups I have been in on facebook, who knows if some of these are even Goths or just on there to cause trouble and make others miserable.

It is definitely a part of my life, but I also don't think every aspect of my life has to be chosen because it's Goth, I also think I don't always need to dress Goth to be Goth. If Goth is a rebellion we must always remember not to just conform to a Gother Than Thou ideal, lose ourselves and become a joke. We have to be able to laugh at ourselves, and do dress as we like and do as we like. When I was younger I always worried about being accepted in the Goth community, as I got older I realised that people will either accept you for who you are, or they won't, and it is their problem if they don't like you!

I was originally hooked by Gothic literature. I liked Poe in my pre-teens and I also love Ray Bradbury, who wrote Gothic stories as well as science fiction. I discovered Anne Rice when I was about 14 or 15. I also had a male friend who was extremely intelligent and had Goth leanings, so that did influence me. I was lucky enough to study the early Gothic genre in high school, at which time I was already interested in Goth culture. I branched out to learn about the culture, music, clothing etc from that point. I have only become decent at doing makeup this year, as I seem to have no hand eye coordination.

I also remember seeing Goth teens hanging around the town when I was younger. My local town had a bit of a Goth group going on and I remember loving their dramatic black clothing. I remember one beautiful boy in a cape and army boots, and girls in long black robes. I did not know what Goth was then but I knew I admired them, even if people like me mum were disapproving.

Because I am from the net generation I also do find a lot of inspiration online, both learning about interesting bands and saving folders full of fashion inspiration.

My inspiration was originally more Romantigoth, although the clothes I owned were mostly just black clothes and lace I found in op shops. My current style could probably be described as creepy cute with a bit of Vintage thrown in.
Posted by Laura Morrigan at 15:32

Email ThisBlogThis!Share to TwitterShare to FacebookShare to Pinterest
Labels: books, gothic, me