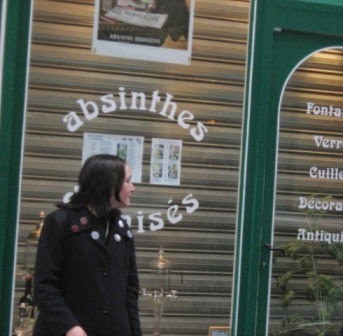 Just for fun, here is a picture of me from 2007 when we went to the Absinthe shop in France only to find it closed for the day. #Gothproblems :P


Day 1 – How did you come to the subculture?

For me it was a series of unconnected events that eventually led to Gothicness.

When I was a kid I was always fascinated by the dark beauty of the black clad teens who hung out in the local park. The rather pagan looking sculptures there went well with their stark elegance. I also remember a very handsome boy wearing a cape.

I had some friends in high school a few years older than me. I am still friends on Facebook with a few, as we caught up again after high school. I remember them talking about Vampire The Masquerade, and I am pretty sure one of them suggested Anne Rice to me. I especially loved how one of the guys had a pocket watch and waistcoat. I don't think I had even heard the term Goth back then. I read The Vampire Lestat in year 8.

At some point I learned the word Goth, for some reason I can't remember where. By the time I went into year 11 and got to study the Gothic genre for literature (yay!) I already dreamed of dark Romantigoth rags, black lace, red roses, a Gothic boyfriend and piles of Alchemy Gothic jewellery. I think my parents still think that studying the Gothic genre made me Goth.

In year 11 (2004, when I was 17) I was also to meet my boyfriend, now partner, who at the time had a few interesting Gothic interests.

Day 2 – Share photos and experiences from your Baby Bat days.

Interestingly enough, I have very few photos from my early Goth days. Perhaps it was because my parents did not want photos of me looking like that?

I have never really worn much makeup, just sometimes a little eyeshadow or eyeliner and lipstick, as I have fair, mostly clear skin, long eyelashes, and because my mum hates makeup, so I never learned properly.

All my Goth clothes back then came from op shops. I mostly had plain black clothes, a few pieces of fishnet, purple and maroon clothes. I swear I am not lying when I say I don't think I had any embarrassing outfits, although I never tried to dress super Goth, mostly just cute black dresses with black cardis and lots of lace. I guess my style was always pretty casual Goth or perky Goth. I think my few photos are packed away at the moment. You can see one on my banner, the one with the skull.

Day 3 – When did you come out the Goth closet? (If you didn’t then simply discuss the topic)

I told my parents I was Goth sometime during year 11, I think. I wish I hadn't told them as it caused trouble until the day I moved out, since they could not see me as the same person they did before I started wearing all black and the occasional safety pin. I already had problems with them before this, however, as they had some old fashioned values like not dating.

I seriously looked really hard for some photos but couldn't find any older than about 2007, some of which I am sharing in my Flashback Thursday posts.
Posted by Laura Morrigan at 18:06

Email ThisBlogThis!Share to TwitterShare to FacebookShare to Pinterest
Labels: books, gothic, me