I wrote this short story thinking about what it would be like if everyone in the world was tattooed, and those without tattoos were the ones who were judged by others. Because I like to play with realities, I also made blank skin a condition that cannot be changed. I know that tattoos are a choice etc., but they often have a distinct meaning to those of us who have them, and I tried to bring this across with the idea of a woman who could not change her inkless state, and just wanted to be understood for who she was. It is also an examination of beauty standards and the way those who are different in any way are treated.

Sorry if my Latin term isn't correct, I only know a few Latin words, so I had to rely on the internet to translate the title of the made up condition.


This Document Copyright ©2014 By Laura Morrigan  All Rights Reserved 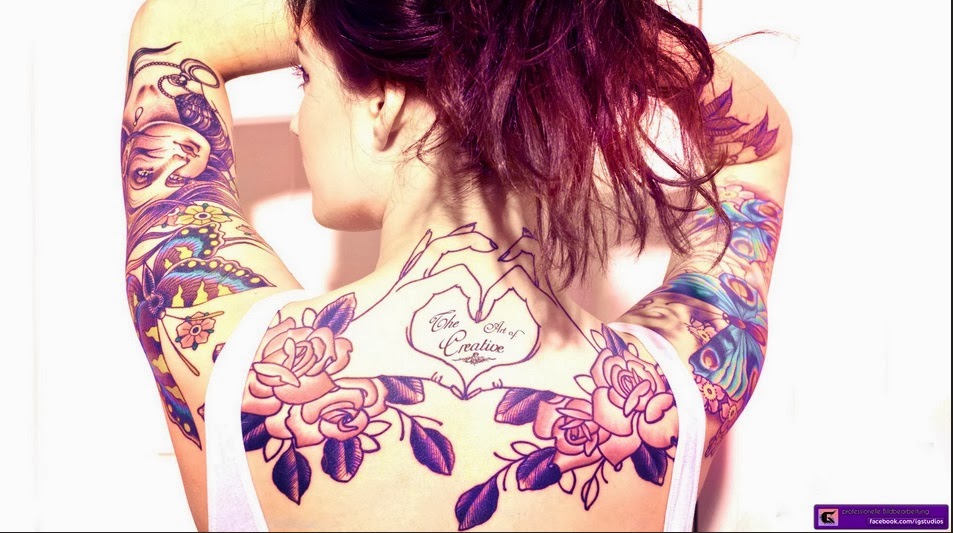 Freak. Unmarked. She was used to the insults, but the words still stung. She hated the way they looked at her. Mothers, steering their children away from her, as if her blank skin was catching, men, leering at her, imagining what she looked like without her clothes, as though the blankness of her skin was intended only for them.

She was diagnosed with the condition when she was six, after nearly a year of endless tests. She could still see her mother, crying inconsolably as if she were the child. Vestibulum pelle, they called it. Blank skin. It had first been noticed when she went for her first mark at five. She felt pride at the stinging pain of the needle and the darkness the ink left under her skin, but the next day, it was gone. Unlike all the other children in her class, who wore their pink and sore tattoos with pride.

As the years went on, and the intricate patterns that covered her classmates' skin grew and grew, she felt like more and more of an outcast. She wore long sleeves to hide her arms, long pants or skirts to hide her legs. She was so excited when a boy finally asked her out, until he took her for a ride in his car and tried to seduce her. He said his parents always told him girls without tattoos were easy. She hit him hard, and ran home crying.

At night, she would lie in bed looking at books of tattooed men and women, tracing the blue lines that covered their skin with a finger, trying to unravel the knots and bows. She frequented the forums online, 'blank is beautiful', 'this is our choice', but somehow, deep down, she still felt like she was the freak everyone said she was. There was a time where she used to purposefully knock her arms and legs on things to watch the blue bruises bloom, and feel that at least she was, in some way, marked.

After she finished school, she tried to get a job, but no one would take her. They would look away and stammer apologies, say she just wasn't right for the job. She saw their eyes continually slip to her long sleeves, knew that they knew who she was. The freak girl. The unmarked one. People were uncomfortable around her, no one wanted her working in their store. Her mother had run out of the energy to care anymore, she didn't have enough sympathy left. She clearly blamed the stress of having a freak for a child for the divorce. Her father never even bothered to call.

One day, she met Marta. Marta was an elite, the blue maze of lines stretching from the top of her shaved head down to her fingertips and the very ends of her toes, where her toenails had been stained blue. She wore tiny shift dresses to show off her art. Everyone worshipped Marta, and she had more girlfriends and boyfriends than anyone else. She was still at university, but she already had a handful of job offers lined up.

'You're beautiful,' Marta told her the day they met, taking her bare white hand in her blue one. 'You're so unique and beautiful and you don't even know it.'

'I'm a freak,' the Unmarked said. 'No one will employ me, as if my lack of ink marks some deficiency in my soul. Everyone turns away from me, treats me like I am diseased. My cousin won't even let me see her child, as if I am a bad influence.'

'People fear what they don't understand,' Marta told her, 'you are different and people fear it. But you are wonderful.'

Marta called her Snow, for her pure, unmarked skin. The girl shrugged off her old name like a snake shedding its skin and became Snow. When they lay together, tattooed skin against unmarked, Snow felt complete.

The relationship only lasted three years. Marta finished university, got a career, and left Snow for another elite, and had elite children with him. For a while, Snow was in despair, until she remembered that if Marta had found her beautiful, surely someone else would find her beautiful one day. The love they had once shared gave her the confidence and courage to go on.

Snow moved to Iceland, where there was a larger community of Unmarkeds. There, amongst the cold, with hooded cloaks, gloves and scarves, they stood out less. But Snow didn't want to fit in. She was studying, planning. Eventually, she would start her own organisation, campaigning for the understanding of Unmarkeds, and for it to be treated, not as a disease or disability, but just a different way of being.

When she was thirty, Snow, now CEO of a large company that helped Unmarkeds all over the world, met Petyr. Petyr was head of a modelling agency that, among its tattooed beauties, also employed Unmarkeds. Petyr, like most people, was marked, but he loved her just as she was. Their child, Andrea, was not born a Unmarked. When she was five, she had her first mark, but she and her parents agreed that it was her choice if she would get more. She waited until she was sixteen to get her next mark. Things were changing by then, and it was no longer so strange to go unmarked. Andrea was proud of her mother, and wanted to be like her. In the end, Andrea marked one side of her body, and left the other bare, in honour of her mother
Posted by Laura Morrigan at 01:03

Email ThisBlogThis!Share to TwitterShare to FacebookShare to Pinterest
Labels: my writing, writing