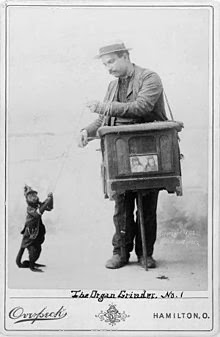 I made up a basic story to go with the music, the music doesn't fit it exactly scene by scene or anything, and there are a few songs that might not quite fit but I enjoyed and thought they suited the style of the playlist. The basic mood fits in with the different acts of the imaginary play/ opera.

In the dark of the night, under a full moon dance, a witch falls for a mortal who stumbles upon their revels, although their love is forbidden.

Despite everyone trying to tear them apart, they are married, but her father the Warlock King spirits her away to his homeland, as her lovers people also intercede to try and 'rescue' him from her. He breaks free and searches for her. After a night of terrors the two are reunited, but she dies to save him.

The young man mourns at the witches grave. He pledges to remain forever true to her. In the end he leaves to spend the rest of his days as a restless wanderer.

Mozart- Sleep Oh My Princess
Abney Park- Sleep Isabella
The Pirates of Penzance- With Catlike Tread
The Clockwork Quartet- The Watchmaker's Apprentice
Parlour trick- The yellow wallpaper
Loreena McKennit- The Lady of Shalott
Dead can dance- The wind that shakes the barely
Abney park- I am stretched on your grave
Mozart- Lacrimosa
Nox Arcana- The Raven
Alcest- Autre Temps
Elvin's Tales- The winds are silent
Agnes Obel- Dorian
Posted by Laura Morrigan at 02:20