The Beast in the Forest

A short story written on a rainy day.
This Document Copyright ©2014 By Laura Morrigan  All Rights Reserved 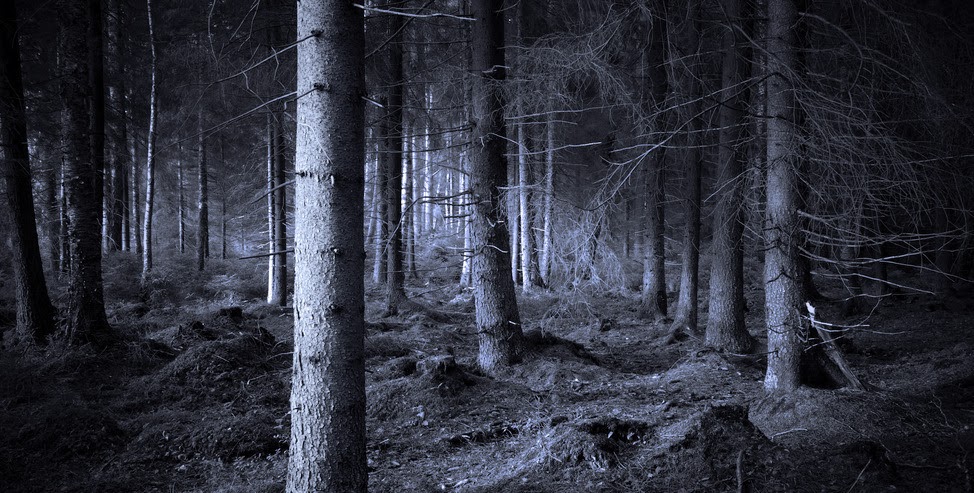 It was raining outside and Clara couldn't go out to play. Judy was playing with the dolls again and Clara pretended to read a book while secretly watching her. Judy was her older sister, and sometimes she scared Clara.

Judy looked up and saw Clara looking. She gave her a wide grin, made a little spooky by the front tooth that had fallen out recently, the adult one yet to grow in its place. 'Pick a story, Clara', she said. 'Beauty and the Beast', Clara said quickly, turning back to her book. She didn't like Judy's stories.

'Once upon a time,' Judy said, 'there was a girl so sweet and beautiful that all who saw her called her Beauty. One day her father, a rich merchant, went to the port to see his ships come in. He asked his daughters what they wanted. The eldest wanted jewels and dresses, but Beauty only wanted a single rose. Alas, when he got there, he found that his ships had all been lost at sea and he was ruined. On the way back, he saw the most beautiful roses growing in a garden, sneaking inside to steal one, he was caught by the most hideous beast. More hideous even than you, Clara.' She shot Clara a hard little look. Clara patted her podgy little cheeks sadly. Judy often told her she was ugly, but it still hurt.

'The beast made the merchant promise to bring back this beautiful daughter for whom he wanted the rose, he merchant did as he was told, but when the hideous beast saw Beauty, he was so shocked her her beauty in comparison to his hideousness that he ripped off her head, and left her dead in the garden under the roses!' Judy's voice was gleeful as she ripped the head off One of Clara's favourite dolls and threw it out the window into the wet garden.

'That's not how the story goes,' Clara whined. Judy only laughed and wandered off to go steal pastries from the kitchen. Like most of the servants, Cook adored Judy and let her do whatever she wanted. Clara gazed out the window at the rainswept garden. Somewhere out there, Dollie was lying without a head, in the rain. She looked around. None of the servants were in sight. Quickly, she ducked out the door and into the garden.

The garden was a vast one, as Clara's parents were wealthy. A long stretch of garden beds, flowers drooping and broken from the rain, led to a small forest, where Clara and her sister were forbidden to go. Judy said it was because hobgoblins lived in that forest. Despite their childlike size, they delighted in eating children alive and cleaning their teeth with their finger-bones. Clara shuddered at the sight of that forest. She began looking around at the flowerbeds under the window, but she could not see Dollie at all. She did, however, see unusually large, wet, muddy footprints leading from under the window across the garden. She began to follow them, leaping from footprint to footprint, following them across flowerbeds, the rain sticking her hair to her head and ruining her white lawn dress and white mary janes. She was too intent to care. Finally, here was an adventure of her own, and Judy was not here to spoil it.

Clara was a little frightened when the footsteps led into the forest, but she told herself not to be a silly little girl, and then darted inside. In the forest, the trees were so thick, that no rain came through. It was very dark, on this overcast day, and she could barely see where she was going. She wasn't sure how long she wandered for, but after a while, she realised that she was lost. She sat down on a fallen tree, tears pricking her eyes. She hadn't told anyone where she went, suppose she was lost in here forever, how happy that would make horrible Judy!

Just then she heard a growling noise over her shoulder, turning very slowly, almost too scared to move, she saw,looming over her, a beast. She could feel its breath on her face, it loomed up so high above, almost to the top of the trees. Its eyes glowed red, and she could see branches tangled in its thick fur.

'Why not?' the Beast asked. It did not speak aloud, rather its voice rang inside her head, so loudly, she wanted to clap her hands over her ears, even though it would not have done any good.

'Because I am an ugly, bad little girl!'

'I am excessively fond of eating ugly, bad little girls!' the Beast replied. 'But you don't look like one to me.'

'Judy said I was', Clara said.

'Is Judy your sister? Is she an ugly, bad little girl?' the creature's breath was terrible.

'I don't think so. Everyone likes her and lets her do whatever she wants.'

'She sounds perfect', the Beast growled, a long string of drool breaking off from its muzzle to land on Clara. 'Take me to her!'

Clara walked out of the forest, holding the Beast by his giant paw. She had not found her broken doll. Although she was sure the Beast had taken it, she was never sure why. She didn't dare ask why a Beast liked to play with dolls, she guessed Beasts weren't that much different from little girls.

At the front door, Judy waited, making horrible faces at Clara. 'You left the house, I'm going to tell mother', she said, then she saw the Beast.

'Clara, what is that horrible thing? You can't bring it inside! You are going to be in so much trouble!' She sounded gleeful at the thought. Clara only smiled. Judy stepped back as Clara opened the door and led the Beast inside. He had to duck to go through the door, but once they were inside, he could stand up under their high ceiling. He gave Judy a toothy grin.

'Bad little girl', the Beast said. This time, Judy could hear him too. She shook her head. 'I'm a good little girl! Everyone says so! I'm pretty and everyone loves me and does as I tell them!'

'You taunt your little sister, you tell everyone what to do and you are just eight years old!' the Beast said, 'you would just grow up into a horrible woman. Better to eat you now, while you are plump and juicy.' It stepped toward Judy.

Judy turned and ran up the stairs, the Beast followed her. Judy was swift and he lumbered slowly, but he took long strides. Clara followed them up the stairs, her short little legs hurting with the effort. She got to the top of the stairs just in time to see the Beast catch up Judy in its big paws.

'Perhaps not on the outside', the Beast said.

It grabbed one of Judy's arms in each hand and began to pull. Clara wanted to look away but she couldn't. As she watched, something strange happened. From Judy, the Beast began to pull a little creature about her size, but with matted fur all over and red eyes like those of the beast. As Judy's body fell limply to the floor, the little beast looked around it, eyes wide.

'What did you do to me?' the Judy beast demanded.

'I just showed you for the beast you are, the Beast grinned. 'Come on, now, it's time to go back to the forest, I hope you realise that I will be a much stricter parent than your old ones, there will be no playing around in my forest, you will grow up to be a proper, well behaved beast!'

'No!' Judy stamped her foot. 'I'm not going anywhere with you, you horrible monster!'

'You're a monster now, too!' the Beast smiled. 'You'll see, when they all reject you, you'll have nowhere else to go.' With a nod at Clara, the Beast walked down the stairs and out the back door. She could see it tramping across the flowerbeds, crushing the petals under its feet.

Judy looked down at herself then over at her little sister. 'You've really done it this time, you little brat!' She launched herself at Clara, her teeth gnashing. Clara screamed. As Judy held her down, about to bite her, the servants came running. One of them knocked Judy off with a broom, hitting her hard in the backside. Judy gave an indignant yelp. The servants chased her down the stairs and out the back door. Even Clara's father came out of his study to see what was going on.

'A baby bear got into the house,' one of the servants informed him. 'It attacked the girls.' At this, her father ran back into his study for his rifle. Clara watched him lean out the window, take aim at the furry little creature that was running across the garden, and fire. The creature was caught in mid-run, and fell to the ground. It dragged itself back up and limped into the forest, whimpering.

The maid was crying over Judy's limp little form, she had no idea that the real Judy was stumbling towards the forest in the rain, shot by her own father. Later, some of the servants remarked that it looked very strange for a bear, with its red eyes and almost human mouth.

They searched the woods, but they never found either of the beasts. After Judy's supposed death, everyone wanted to make up for it by pampering Clara, but she always did her best to make sure she did not turn into a spoilt little girl. She was always afraid the Beast would come back for her.

Once, after a particularly rainy day, Clara found her broken doll left outside the window, like a peace offering from Judy. She took it inside and put it in Judy's bed. Sometimes she wondered if Judy was very good, whether she would change back and come out of the woods. Alas, it seemed that Beast parents are much stricter than human ones, and Judy could never live up to its standards. Judy never came out of those woods again.
Posted by Laura Morrigan at 19:06