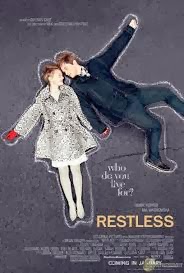 May include mild spoilers, although there aren't any twists in this movie that will ruin the ending.
At first I thought Restless was like a Harold and Maude for the 2000s. It does have that aspect- a lonely isolated young man seeing a change in his life through a quirky energetic woman at the end of hers. However this movie is darker, because, although Annabel is near death, she is barely a young woman.

At the beginning of the film, Enoch is totally isolated, except for his sister, with whom he barely associates. He attends funerals of strangers in a three piece suit with watch chain and a stricken look on his face as if he is the one about to die. He starts off very withdrawn, mumbling and constantly saying 'whatever', but gradually opens up with Annabel. At first it is perhaps because he isn't afraid of her, as she is so near death, he thinks she can't hurt him like others, or perhaps it is his obsession with death that draws him to a dying girl. Perhaps it is because he knows she will die soon, and, unlike with everyone else that he might love, that death can't come as a shock. Annabel tells Enoch soon after they meet that she is dying, and he agrees to spend the time with her, but he doesn't realise how much her death will affect him until he realises he is so much in love with her he cannot bear the thought of her passing. She has forced him to feel again. Brought back to life by a dying girl.

Annabel is a little too good to be true with her enviable Vintage wardrobe, love of Darwin, birds and insects, and being calmly and philosophically resigned to her fate. Still, I don't think it would be a better movie if she was more normal, she is more memorable this way. Her sweetness make her death all the sadder. Mia Wasikowska is perfect as always, and has, I think, become one of my favourite young actresses. Of course I love Enoch, anyone that wears a smoking robe as daywear and is friends with a ghost goes in my good books and there is a vulnerability to him that makes you want to save him.

Restless explores the effect death has on families, especially near the end of the film, where references are made to both of their sisters 'giving up their life' for them. However their relationship with their families is very different. Enoch doesn't really have a relationship with his sister, and we find near the end that he still blames her for his parents death. Annabel is much more upbeat, dealing with her impending doom much better than her family do. After her diagnosis, she talks about a lizard with a short lifespan, and it is her sister who can't deal with the reality of her death.

The two scenes that I mentioned near the end are both quite meaningful and perhaps the time when emotions are really allowed to come free, after everyone trying to hold in their feelings. After fighting with Annabel over her death, finally realising that this isn't just part of their games, with a script for her death scene, but real life, Enoch argues with his sister. When she says she gave up her life for him, moving here to live with him after their parents died, he retorts that if their parents hadn't been going to see her, the car crash would have never happened. In her own house, Annabel talks with her usual calm resignation of how she was always jealous of her popular sister, who had so many boyfriends, and mentions that there haven't been any for a while. She asks her sister if she gave her life up for her, and her sister replies that none of that was important. We see how everyone is affected by the deaths in their families, both before and after the fact, and can never be the same again.

There are sweet, funny moments. A lot of it seems very dreamy, like the kind of perfect day you could imagine, but with a timer on it, a warning that the end is near. Bike rides, Halloween. We know she is dying, as there are also hospital visits and blood transfusions and a poignant scene where they visit the morgue and see the body of another dead young girl. I find it a little hard to imagine that a girl with only three months to live would be in any condition to do all these things, but I guess the film is dealing with situations and emotions in a rather stylised way, rather than showing completely stark reality. With some of the montage of events near the end, it is hard to tell how much time has passed. So in the end, rather like Harold and Maude it serves as a bittersweet Memento Mori, reminding us to live as many magic moments as we can and die without regret.

The ending is bittersweet. We were never deluded that Annabel will live. We see Spring finally arriving, and Annabel's Wake, with a table of sweets, like Annabel always wanted, and lovely ceramic bird sculptures on the table. It also ends without a final speech at the very end, which I think was nicer and more honest. Instead of showing Enoch speaking of how much Annabel gave him, we see images of their short time together and his twitching, hesitant, painful smile. We don't always have the words or make great speeches, but feelings and memories are real and stay forever.

The soundtrack is a little reminiscent of Harold and Maude. Sort of folksy music. Not really my kind of music, mostly, but it suits the style of the film.

Quote: 'I see now that death is easy. It is love that is hard.'

Costume- 5/5 I loved her Vintage wardrobe with her plaid coat, bowler hat, little pin watch, and especially her white gauze and lace dress near the end. I loved his smoking jacket, funeral suit complete with waistcoat and chain.
Plot- 5/5
Ending- Bittersweet, not too drawn out, not too cliche 5/5
Overall- 5/5
Posted by Laura Morrigan at 03:30