The Clockmaker fundraiser on Indiegogo

Garrett contacted me about this fascinating looking Steampunk film fundraiser on Indiegogo. From the teaser video, it looks like there is some very nice Steampunk tech in there! It is a post apocalyptic Steampunk Western, and it sounds really interesting.

You can check it out here

There are only 19 days left, so if you think there aren't enough Steampunk films around (and lets face it, there aren't) consider donating something, every little bit helps.

You can also help out by sharing this on facebook, your blog, tweeting it, etc.

Here is an awesome still from their facebook page. 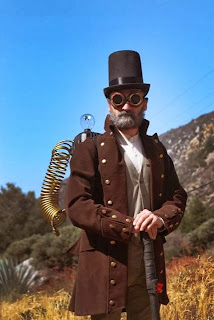 If you believe in independent film, check it out!