I wrote this review quite a while ago and never posted it. It now seems that after a very long hiatus, The Paradise is finally returning, I just found these production pictures! I love the grey and black dress! Very excited that it is coming back! The Paradise 2: Behind the scenes photos

I am not sure what I can write about The Paradise after having watched Mr Selfridge. They are both similar in dramatic style and similarly contain wonderful costuming! Of course The Paradise is set a little further back in the past, being set in the Victorian era, while Mr Selfridge is set in the early Edwardian era, and was based on a Victorian novel by Emile Zola, as well as screening a year earlier, so we can assume that nothing in it is based on Mr Selfridge. I love them both, and hope they both continue to do well.

As with Mr Selfridge, I had the most fun watching them think up ideas for promotions, such as choosing a 'Miss Paradise Pink' to bring more women in to shop in the store, having a private lingerie sale party after hours, etc. It was sadly fascinating to seethe triumph of ready made over custom garments. Unlike Mr Selfridge, The Paradise also focused on how the big department stores pushed out the little stores, who could not afford to compete. The uncle of the main character Denise who works in the store cannot afford to employ her himself and is being driven out of business, along with others on the street. There was some mention of women having to choose between a man and a job, but women's issues such as this were not explored as deeply as in Mr Selfridge. Still, with Mr Selfridge coming out a year later, it isn't really fair to retroactively compare them.

The Paradise did stray a little more into melodrama,

(SPOILER) such as dark secrets and murder (END SPOILER)

There were definitely aspects like that that started pushing towards the soapie envelope a bit. However, it was based on a book written by a Victorian author so I think it is fair to assume that these aspects were probably in the original novel, the Victorians did enjoy melodrama.

I really enjoyed the costumes, I would love to have one of each! They are not totally historically correct, but they are still beautiful looking, not some of the awful costumey* things I am seeing in recent dramas. All in all I very much enjoyed it and would recommend it to all Victorian enthusiasts! 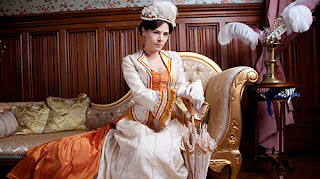 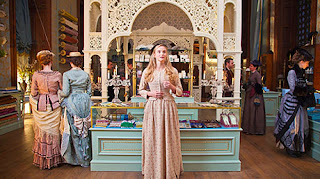 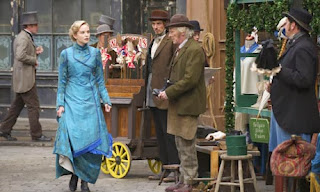 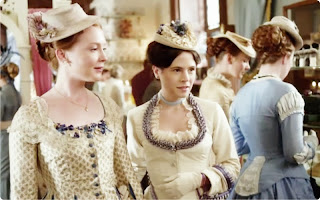 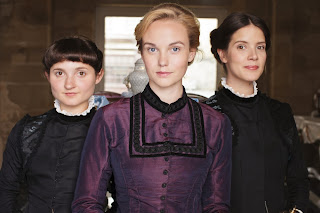 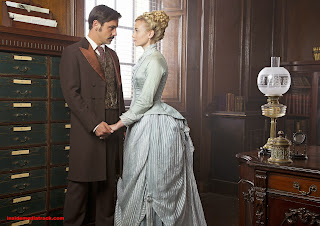 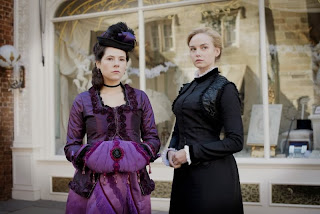 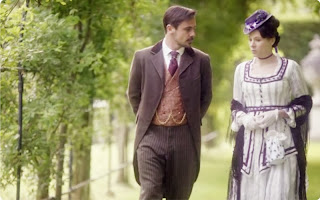 The Paradise is based (how loosely I am not sure) on the book The Ladies' Paradise by Emile Zola.

*costumey is a word often used in costuming and re-enactment circles to describe really frumpy, badly made costumes that look in no way historical. Think cheap Halloween costumes.
Posted by Laura Morrigan at 05:35