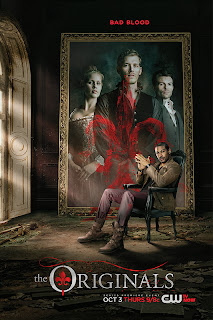 New TV Series
Spinoff from The Vampire Diaries
This Vampire Diaries spinoff takes us back to the New Orleans of Anne Rice, with conscienceless vampires that feed off tourists, and witches with ancestral magic at war with the vampires. So far it seems to be working with a combination of flashback scenes of the family's early days in New Orleans and their modern day return.

There have only been two episodes too far, and the first was just cut pieces from the end of The Vampire Diaries season 4, so it is hard to make any judgments. It is great to see some New Orleans scenes, though, including the cemetery, and it would be nice if there are some festivals/ sights etc worked in that are particular to the culture of New Orleans, as it is a place that really fascinates me.

The flashback story is interesting if a little hurried and sketchy, and the lumpy, costume shop look of some of the costumes is a bit disappointing, considering that the flashback costumes in Vampire Diaries, such as Catherine's gowns, were really very pretty, if not entirely historically correct. I hope they will continue the flashbacks, but a little slower and more fleshed out, and with more good costumes and less bad ones.

At this point, I really can't offer a proper opinion or score, but I would say it is definitely worth checking out, just to see what happens and to see some of New Orleans.

Have any of you seen it yet? What do you think? 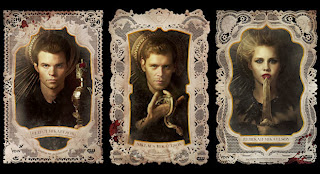 I really liked the style of this promotional art, the tarot card effect and white lace borders are gorgeous! I would like a portrait like this!
Posted by Laura Morrigan at 20:33