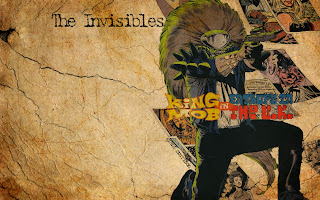 "Part of what I want to achieve with this title in the long-term involves actually changing the consciousness of the readers by presenting them with various techniques and concepts which will undoubtedly alter their way of looking at the world. In that sense, THE INVISIBLES isn't a comic about something but is the thing itself and every reader is a potential Invisible. If The Invisibles are Shamanic Terrorists, the comic itself is an act of shamanic terrorism."

Grant Morrison in the proposal for The Invisibles.

The Invisibles truly is a graphic novel series that defies explanation. It has to be experienced to truly appreciate it. It is a mind altering substance, it will change your thought patterns, open up your mind, vivisect your thought processes. Reading it will alter you.

This was how Morrison summed it up:

"The Invisibles is the name given to a society of occult subversives which may or may not have existed for hundreds, even thousands of years. The five main characters belong to an activist cell but there are also stories dealing with people who don't even know they belong to The Invisibles. All that's required to be a meember is to be involved in sustained activity against all forces which retard human development and evolution. (Or so it seems at the beginning. As the comic progresses, conspiracies and counter-conspiracies start turning on each other like hungry Moray eels until nobody can be sure who is working for whom.)'

In his proposal he mentioned wanting to do his own version of Neil Gaiman's The Sandman- a story that has a central structure but is able to branch off into other stories about related characters,'stories that will eventually come together and be revealed as one large-scale, shimmeringly holographic tapestry'. Also, like The Sandman, it would be about a different kind of superhero.

It is clear Morrison has put a lot of himself into the story, it is interesting to note that Morrison is said to look like King Mob, King Mob's also writes under the nom de plume Kirk Morrison and they both like salt and vinegar chips (he asks for them in one of the last comics ). In some ways, the character of King Mob seems inextricable from Morrison himself. He also claims that his illness to the point of near death while writing the comics was related to the intense magic powers in the comics.

This is a comic that will definitely open your mind up to think in different ways. The sheer scope of Morrison's genius is mindblowing, he can imagine and describe things the rest of us do not even dream of. This comic series is a unique and mind altering (and sometimes harrowing) experience, and I would recommend it to everyone!
Posted by Laura Morrigan at 21:02