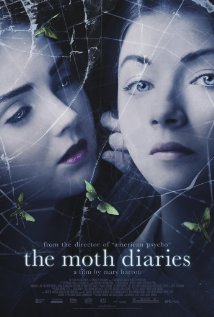 Movie directed by Mary Harron from the book by Rachel Klein

The Moth Diaries is, at its heart, an amazing book about the pain of adolescence and also about the obsessive friendships that develop between teenage girls. A story of teenage emotions on the edge, the book drives us through a constant confusion of is she or isn't she.

It is also a beautiful and elegant Gothic movie and book, that references the classics in the genre and maintains a perfect atmosphere of confusion, desire and unrestrained emotion.

Rebecca has a deep and rather obsessive love for her best friend Lucy, but when Lucy is stolen from her by the new girl, she finds herself alone and alone in the fear that Ernessa is in fact a vampire, preying on the sweet and trusting Lucy.

It has been sometime since I read the book so I can't really compare them, but I did love the movie! From what I can remember, it is fairly faithful to the book.

First of all, some trigger warnings.

The book and movie contain suicide, possible murder, wrist cutting and depression among teens. Anyone who thinks that these things may adversely affect them should avoid the book and movie, excellent though they are.

The references to classic Gothic literature: The name Lucy (from Dracula), Carmilla, Rebecca reading through old books for the older vampire lore that you no longer hear, such as vampires being born of suicide, and the old atropaics to ward off vampires.

The examination of the obsessive relationships between girls, and the heights of teenage emotion

I don't remember whether the book addressed it in the way the film did, but the film draws a positive uplifting conclusion out of the fact that she refuses to follow in her father's footsteps and kill herself, and chooses to live instead, and face the future.

Closeness to the feel of the original book- 4.9/5

I seem to remember the book framed the story from the point of view of an adult, which made it clearer she would come through it, so I liked that that movie did not do that. It has been too long since I read it to notice any small changes, but on the whole, it felt very true to the book.

I liked the girls school clothes,they fitted the setting. I loved that they all wore old fashioned night gowns and the time period was a little loose (unless you look at the car her mum drives, cars are ALWAYS the worst era giveaways, but that's props, not costume). I adored the flashback Victorian/ Early Edwardian gown, and Valerie Tian (who played Charley)'s quirky style (apparently she makes her own clothes in real life)

Overall- 4.9/5 This was a book I loved and the movie did not disappoint.It was a beautiful Gothic film, and finds a place among my favourite films.
Posted by Laura Morrigan at 19:11