I am actually going to be reviewing two separate works called Twixt, a book and a movie, both of which I very much enjoyed. Despite the same titles, the two works are utterly unrelated, both very different stylistically and great in their own ways. 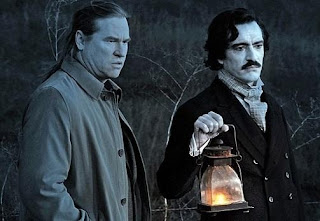 Washed up author Hal Baltimore having a conversation with Edgar Allan Poe.

Twixt was a movie made a few years ago by Francis Ford Coppola that failed to get great reviews from most sources. However, as someone who loved both Bram Stoker's Dracula, and his other works of a different style, I knew I had to see it and see for myself.

There may be some mild spoilers in the following

Sin City-esque use of black and white with bits of colour in some scenes, (mostly flashbacks or dreams)- orange lantern, yellow lemons, red lights, red blood
7 clocks in the belltower, and none of them are ever on time
The sheriff makes bat houses
The writer takes a wooden fold out chair and table with him when he travels
Conversations with Poe.
Goth kids

Other things I liked:

The song Nosferatu. It is a bit short and repetitive but would make a good song to dance to at a Goth club.

Elle Fanning as V/ Virgininia: Her style has definite aspects of what is known as Ghost Goth, Ice Goth, Albino Goth or White Goth. A predominantly white outfit, with aspects of makeup that make her look otherworldly, ghostly and dead. It's a look I have always appreciated, I love the look of the Brides of Dracula, and kind of want to look like that myself. I have always loved the classic Gothic heroine or vengeful ghost in white.

I loved the Virginia's costume, and am pretty sure I am going to recreate it for myself. I don't mean as a costume, just to wear around with friends, because that's just how I am. Ha ha. 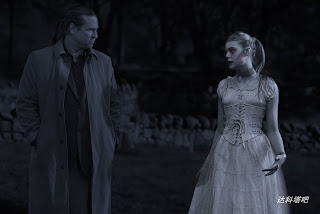 The timeframe was more than a little confusing, different characters wear clothes from different eras, it is hard to tell what period flashbacks are set in, for instance the priest and Virginia's story originally seems set in maybe the 1950s given the clothes, but Flamingo and the other Goth kids look at least 1980s. Perhaps it is just the way some people dress.

The ending is more than a little abrupt and feels a little like Coppola was trying to be a bit too clever, or that he ran out of ideas for the ending.

As I thought, it was an enjoyable movie (or at least for me and others who enjoy this sort of style), but the ending let it down, which was disappointing. I would watch it again, though. The movie is both a bit creepy gothic and quirky, utterly my sort of thing! And it's not the only movie I like where I dislike the ending, I'm not a huge fan of the way The Lost Boys ends either.


My ratings for Twixt: