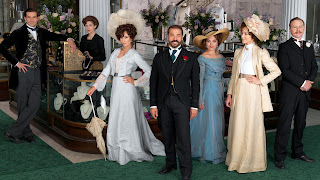 I've just finished watching the first season of Mr Selfridge, and here's hoping there will be a second!

What can I say? The costumes are amazing! I was taking so many pictures! There are definite items that I need, especially all those delicate lace blouses and dresses! I like the style of the early Edwardian era. Sometimes I miss a time when everyone dressed in their best every time they left the house, although I do love some of the (relatively) modern (to people like me) styles we see like Punk and Goth and of course, when I am sick, I appreciate being able to pull on a hoodie and shuffle to the doctors without being judged.

The plot was good, rather similar to The Paradise, which I also adored for the costumes. As in The Paradise we have the brash, bold visionary shop owner, the intelligent and talented up-and-coming shopgirl with ideas of her own, and lots of love and betrayal and moodiness and disasters, but not too Soapie-like, although it definitely has the flavour of a modern drama based in the past.

One character I really enjoyed was Mrs Rose Selfridge (Frances O' Connor), the long-suffering wife who puts up with her husband's neglect and affairs with a beautiful melancholy grace, although falls from grace herself due to feelings for another man. I also liked Rosalie (Poppy Lee Friar), their eldest daughter, who some will recognise from the  Australian children's drama Dead Gorgeous, where she played the ghost of a Victorian girl trapped with her sister ghosts in a modern day school that used to be their home. She has a sweet charm and innocence, rather reminiscent of Romula Garai.

It was also nice to see Zoe Tapper (Desperate Romantics, Stage Beauty) again. She added some sympathy to what might otherwise have been a rather cardboard character of Mr Selfridge's mistress. Another character I who I do not feel was as well written as she could be was Lady Mae. I have no complaints about Katherine Kelly's portrayal of the character, but I would have liked to see more focus on Lady Mae being a strong, intelligent, independant woman, and less on by showing her having manipulative relationships with younger men, which I think showed her in a bad light. As Violette (Selfridge's very young feminist Suffragette supporting daughter who I also hope we will see more of) says, why do the men get to go out and have all the fun?

I was rather surprised at the number of female characters that seemed to have had sex and not got pregnant in an era when contraception was still very rudimentary, but really, unwanted pregnancies are way overdone in drama, so I was glad that that did not happen.

There were a few good discussions of woman's issues such as the Rational Dress Movement, Suffragettes, and the fact that women had to choose between working all their lives or marrying and having to stay home and not be allowed to make their own choices anymore (Married women were not allowed to work).

The biggest thrill for me, as with The Paradise was watching them create all the innovations of modern shopping, things like window dressing, store sales, cheaper store brands of perfume, etc. I found it all very fascinating. It always gives me a chuckle in shows where people tell them it won't work when we clearly have all these innovations nowadays and it works just fine! I loved that in Murdoch Mysteries too, how Murdoch was always creating all these inventions but not patenting them, like stickytape and blutac and Crabtree had the idea of tinned meat. I loved the part where Selfridge's mistress wanted to run what was basically the Edwardian version of a 'sex sells' campaign for perfume with smouldering pictures (fully dressed). Of course, it was far more elegant and restrained than the sort of ad we see nowadays!

All in all, definitely worth watching if you enjoy things set in the Victorian/ Early Edwardian era.

Here are a few shots of the amazing costumes! I want all of the ones pictured. Blue and white/cream are my favourite colours, it can be almost painful to look at all those beautiful costumes! 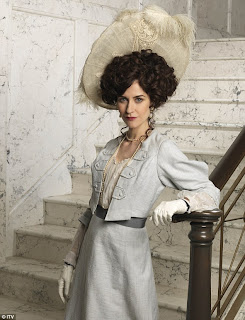 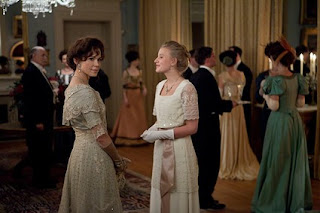 The blue dress lady Mae wears below is just exquisite. I  took so many pictures of it, I have to have it! 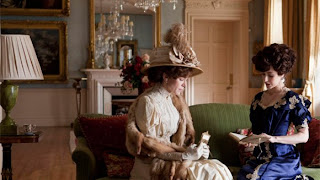 Oh and the hats! I love the hats! I have recently trimmed a hat, and I think it looks pretty good! Keep an eye out in upcoming posts! 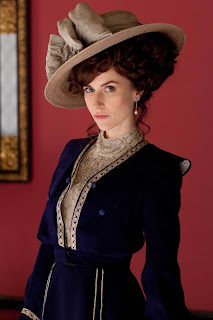