Adele Blanc-Sec: A Movie From a Steampunk Comic 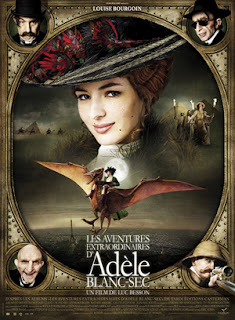 Adele Blanc-Sec is based on some of the French comics about the eponymous heroine which are considered part of the classic Steampunk genre. While not containing any emphasis on technology, they fit another part of the Steampunk genre which is currently undergoing a less publicised phase, stories based more on odd adventures, exotic locales and strange magic than technology, stories such as the works of writers such as Haggard and Jules Verne. As such, it is a bit of a breath of fresh air, and I enjoyed this, although I do also enjoy the books with a more mechanical focus.

The main focus of the story is definitely imaginative and fascinating, tying together two of Adele's adventures, which I believe made up the first two graphic novels about her. An adventure to Egypt to find the mummy of the pharaoh's doctor to save her sister, and trying to solve the problem of an escaped pterodactyl whose life force is tied to the very man who can help her resurrect the mummy. I enjoyed the magical elements, even though some of the farcial humour left me cold.

There are many different kinds of humour, and some countries have their own particular style, this film has a definite French sense of humour, which, while some may enjoy, I found difficult. But then again, my sense of humour has always been more towards the English or dark ends of the spectrum. I found that the things in this movie that were meant to be funny mostly annoyed me, but this may not be the same for others.

I absolutely adored the costumes, and want many of them for myself, especially the blue embroidered coat, the delicate lace dress with the blue ribbons, the huge feathered hats and striped underskirts.

Here are some of my favourite costumes, all of which I intend to have one day! 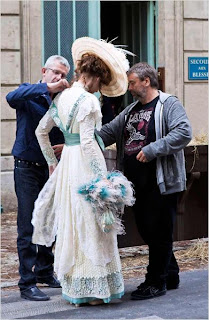 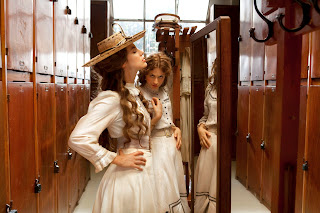 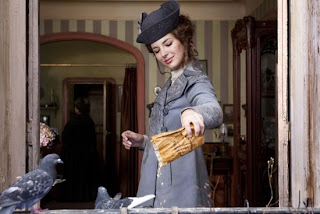 Particular things I liked and didn't like- CONTAINS SPOILERS

The girl who played Adele I think she had a great mix of sarcasm and enthusiasm.

I didn't like the big noses and exaggerated facial features of some of the characters, the farcial humour, there were bits I fast forwarded. For instance the government minister dying while having an affair with a chorus girl, Adele dressing up in various costumes to try and rescue the professor, the game hunter and the policman dressing up in the sheepskins, long winded conversations that were meant to be funny, etc. However, as I said before, my style of humour is mostly old school English and dark humour so others might find this funnier. It was still definitely worth watching the movie!

The ending- she gets on the Titanic. Followed by evil people. We know the heroine isn't going to die, what is the point? To set it up for a sequel? I hate endings that feel like that!

My ratings for Adele Blanc-Sec