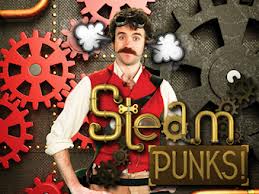 Steam Punks! (sic) is a kid's show currently airing on ABC3 in Australia. Taking inspiration from the growing interest in Steampunk, it uses the idea of an evil robot/ machine that kidnaps 'inquisitives' to answer scientific questions. If they fail, they must stay to serve it forever.

Somewhat like a cross between the kid's show Trapped and a quiz show, the kids must answer questions and do activities. The children arrive through a fireplace at the pull of a lever, and come into the main room where most of the action is set. This room is the one with the main Steampunk decor. This includes a piano with an attached typewriter and phone, through which the machine (unseen except in the rather awful looking animation at the beginning) communicates with the host of the show. There were also giant gold cogs all over the walls, which looked lovely, although they were completely useless, therefore falling under the sometime criticism of some attempts at Steampunk just 'slapping some cogs on it and calling it Steampunk.'

In the first episode, which was the only one I have seen so far, the host had a rather military inspired uniform, which was passable, but I would have liked to see something more Steampunk. He seemed to ad lib a lot, sometimes his comments were amusing, sometimes not so much. I think he was pretty good for a kid's show host. his weird exclamations such as 'Kardashian's beard!" may have been amusing to children but did not really suit the Steampunk theme.

When the kids had to answer questions they sat down on a red upholstered sofa, and computers on metal arms came around the side to lock in front of them. I thought this was a nice touch of actual working technology, as most of the rest of the decor did not actually do anything.

The part where the kids answered questions was not particularly interesting to me, as they were just the typcial kind of science questions they ask on these shows. It was kind of fun how they hit the buzzers with a hammer when they answered questions at the end, but it got old rather quickly. I did like they part where they went to the storeroom to identify scents, as it reminded me a bit of Warehouse 13.  The teleportation chamber at the end was also rather cool, and actually appeared to 'work', as it made the children disappear.

The "Steam Punk (sic) Graduate Marvin" and his assistants all wore aviator helmets and goggles despite not having any clear aviation or driving related roles, which is another criticism for Steampunk purists, who feel that the aesthetic should actually relate to the character you are playing (for instance someone with goggles would usually be an aviatrix, an airship pirate, or someone who likes to drive too fast and hence needs driving goggles).

I would have liked to see a few more sets like in the show Trapped, a sort of semi- Gothic themed kid's activity show that had tasks like poisoned food, and characters like a talking head and an evil Rococo lady in it.

All in all, the show gets about 2 out of 5 for the Steampunk elements. However if you just enjoy watching kids game shows, this is worth giving a go.