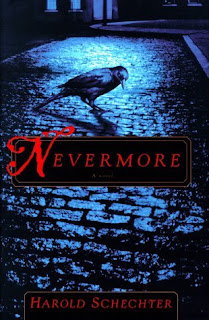 What if Poe's famous Gothic stories were based not on imagination but reality?

This book takes the idea that Poe was involved in the investigation of hideous murders in Baltimore in his youth, murders that seemed to be related to his family. While unravelling the dark thread of these horrific murders, Poe eventually finds the inspiration that leads to some of his most famous works.

Fans of Poe will enjoy matching the murders to similar events in his stories, such as The House of Usher and The Masque of the Red Death. The interplay between the two main characters is amusing as the two are utter opposites. The author chose for his other character American legend Davy Crockett, famous because of his tall tales, but actually very useful to have by you in a crisis.

It is impossible not to like Poe. His neurotic disposition does not sit well with his exaggerations of his own physical prowess, making him seem a little pathetic, but his great mind shines through. I enjoyed the scenes where his effusive and wordy way of speaking made it difficult for others to understand him, as I have experienced moments like that myself.

At first Crockett seems like a bully and a boaster, but I soon grew to like him, rather against my will. He seemed a jolly chap, and very good natured for all the violence he had seen and done. In the end, he was very protective of Poe and quite fond of him, which spoke greatly in his favour to me.

As a fun and engrossing piece of alternate history, we should not look too much into the liberties this novel takes with the truth, but enjoy it for what it is. I very much enjoyed the voice of the novel, as it did feel as if it could have been plausibly written by Poe, high emotion, italics and all.

Recommended for fans of Poe, and anyone who enjoys a good historical murder mystery.