DIY: Converting a Tulle Dress to a Ruffle Bustle

I had a nice dress, but it wasn't a good fit. It was too tight to be comfortable or really move in! Plus,the top half just looked like a bra! :P But it had a lovely ruffled tulle skirt and I hated to throw it away!

Turn it into a kind of 'bustle'.

Here is the original dress: 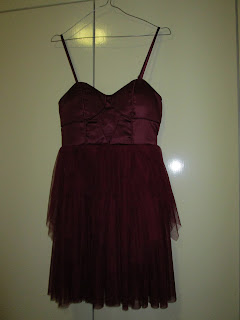 Use a seam ripper to carefully cut the seams and open up the back of the skirt all the way from bottom to top. This will become the front of the bustle!

Then cut it in half!

Here it is cut in half! The bottom half is the important half as I want to make a skirt, not a bra, so leave as much extra material as possible for the waistband of the skirt, cut as high towards the bust as you can! 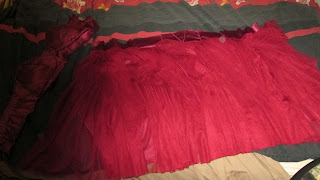 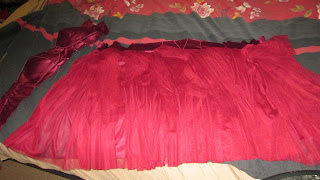 Then I overlocked (well used the closest function my machine had to overlock) all the raw edges, and sewed it under. Not perfectly, I admit. I probably should have taken out the hard channels from the front of the dress (which became the back of the skirt). Also you might want your thread to match the material, but I didn't think the black showed up too badly, and I don't mind a little imperfection. 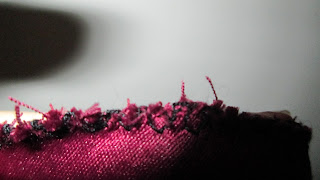 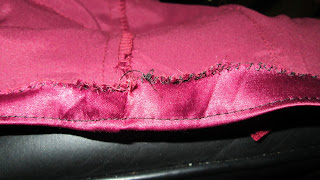 Then I used a dressing gown sash I had lying around. I cut it in half, overlocked the rough edges, and sewed it inside the edges of the dress. I gave it a bit of overlap and stitched it all around the edges so it isn't too weak and won't fall off with wearing! 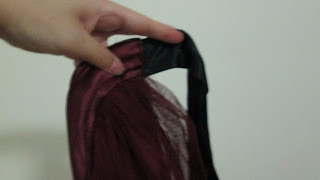 Here is the finished bustle. You could also do it with a ruffly skirt! 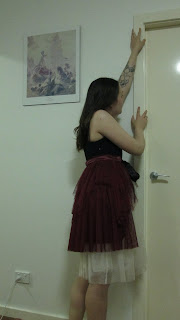 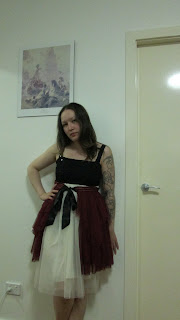