The New Monster That Ate Canberra 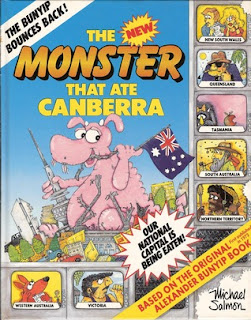 I re-read this today, and I could not stop laughing! I had forgotten all the tongue in cheek jokes about Australian culture! Some of the things I laughed at were:

The Prime Minister being tired from looking through "heaps of tourist brochures to decide on his next overseas trip... work that was both confusing and exhausting!"

"The navy only had a rowing boat and one oar"

The supreme court judge snacking on KFC in his robes

The bunyip sent to work on a soapie as punishment "After all 20 years working on a soap opera woudl be ample punishment for anyone."

Feeding the bunyip on 'scripts that didn't rate'. They tasted "awful- dry, musty and unoriginal."

If "you hear a loud shuffling and snuffling outside your bedroom window one night, don't be alarmed, it probably isn't another lost tourist, baffled beaureaucrat or confused politician"...

A great book, especially if you are Australian!