This was the first time Peter Murphy ever came to Australia, and it was wonderful to be able to attend. It was a fairly small hall, and I stood on a half step about halfway up the hall so I was able to see over the heads of taller people. Peter Murphy's voice is even more impressive in person, he had amazing vocals, which not everyone does live.

I was really more familiar with Bauhaus songs than Peter Murphy's solo music, but it was all wonderful, and I will have to listen to more of his solo work in the future. Some of the highlights were:

Cuts You Up
She's In Parties
a verse of Bela Lugosi's dead (yes, I did nearly faint)
Ziggy Stardust cover

Peter was very friendly, joked with audience, he pulled a girl up from the audience to sing to at one point. He was very energetic, dancing around and really seeming to have fun and his voice really was AMAZING! He has a real stage presence that is amazing to see, and I can see why people are drawn to him.

The opening act was The Dark Shadows, a Sydney based all girl band which played great post-punk influenced music. I loved the old school sound. Their main singer had a great voice, and they really looked like they loved what they did. I got a chance to talk to the bassist/ vocalist Carly and the vocalist/guitarist Brigitte and they were both really friendly. Carly and I chatted about 80s rock and David Bowie. If you like Bauhaus or other post-punk and new wave, I recommend you check them out!

Afterwards, we headed over to the afterparty, I danced for about an hour before I headed off to bed. It was an amazing night! 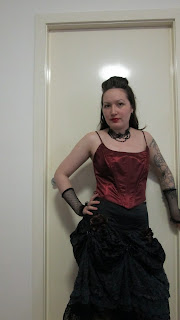 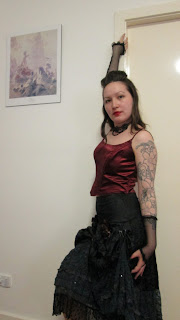 Black mesh gloves: new from opshop
Corset style top: Purple 22 vintage in Newtown
Skirt: from op shop. I pinned it up in bustle style with some safety pins. 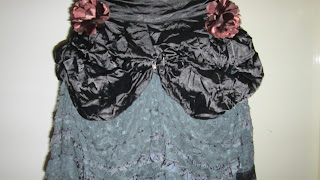 Detail of pinned up skirt. It's pretty cool, it has layers of black and grey lace in different patterns. The brown flower clips are from eBay. I used the brown ones not the crimson ones as they clashed a bit with the maroon corset top.

My camera couldn't really handle the darkness, the smoke machine and the distance, so this was the only photo that even came out, but the memories mean far more to me. 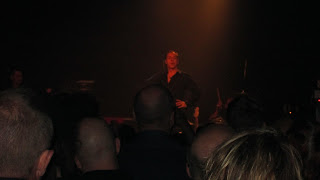