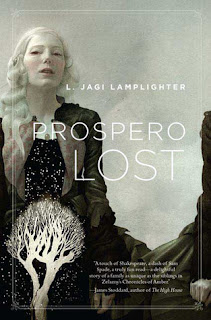 A novel by L. Jagi Lamplighter

At the end of The Tempest, Prospero burned his books and gave up magic, and Miranda wed the son of the duke of Milan.

But what if that wasn't really what happened?

You see, Shakespeare gave the tale a happy ending, but a much less interesting one. In truth, Ferdinand disappeared the night before the wedding, and Miranda has spent the last few hundred years alone, running the company Prospero inc. for her beloved father, who never really gave up magic at all. Over those hundreds of years, he had several other children, most of whom never really got on with Miranda, and all of whom she has fallen out of touch with.

Until her father disappears a message arrives, warning of "three shadowed ones"...

This book is a true work of art, weaving together characters from Shakespeare with other mythological creatures, and people from history, L Jagi Lamplighter weaves a complex and fascinating canvas. Of course, there are also references to Dante's vision of Hell.

I was enthralled by the historical exploits of the family, as well as the alternate history, and creation myths. I loved the story of how humans were created, the angels and demons, and the role of Prospero inc. The Prospero family have spent the last hundreds of years using magic to make deals with all the gods and other mythical creatures so that mankind can continue to exist the way it does, oblivious of the true supernatural dangers they daily face.

Miranda could be a little bit of a goody goody sometimes, but after hundreds of years of being a dutiful daughter, what do you expect. I really got to like the character of Mab, and there are other characters I am excited to learn more about, who I won't mention, I don't want to spoil it.

This book has definitely been one of the highlights of my reading so far, and I urge you to pick up a copy yourself!
Posted by Laura Morrigan at 01:56