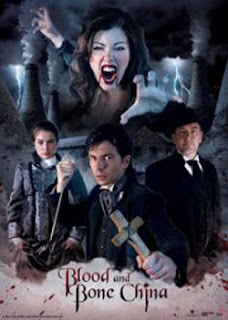 Blood and Bone China is a set of 12 webisodes that together form a wonderful little movie. It is a Victorian mystery about vampires, with just the right combination of humour, Gothic melodrama and some clever little twists.

Rachel Shenton, who plays Anna, reminds me of a cross between two of my favourite actresses, both in appearance and acting style. She reminds me a bit of Anna Paquin (Rogue in the X-men movies) and also of my beloved Elaine Cassidy, (Fingersmith, The Lost World, The Others) in all her delightfully reserved period piece acting.

Anthony Miles as Newlyn Howell is adorably bumbling and hopeless, not so much so that he becomes annoying. Despite being well out of his depth, he continually tries his best to help out with the horrific situations he finds himself in, which is quite touching. It was funny to see him making scared puppy eyes at the indomitable Anna.

The costumes were a little bit Steampunk, and very nicely made. The sets also, looked acceptably period, rather than just sets. Obviously, it was filmed in historical buildings, but it's the little things like the clutter in a room that make it seem real, not just a set just created for filming.

I vastly enjoyed watching this! You can see it for free on YouTube, or buy your own copy of the DVD. I'd really like to make something like this myself from one of my stories in the future, although there aren't really many historical buildings where I live that aren't surrounded by really obvious looking modern ones. Maybe I can find someone who's good at CGI.