Lili MacCarthy AKA The Necklace Killer 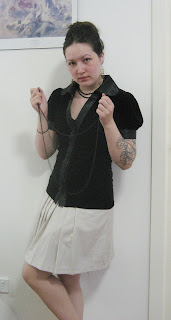 Lili MacCarthy was well-liked by all who met her. An elegant young woman from a good family, she was married to the charming Senator MacCarthy. They moved easily among the good families of Wendigo Creek, Maine. Everything seemed perfect in their life.

Then one day, Senator MacCarthy was found murdered, strangled with a string of Lili MacCarthy's favourite black pearls.

Lili fell under suspicion, but her natural charm and the elegant outfits she wore to court soon had everyone supporting her. She was let off without charge. The beautiful young widow soon had a string of suitors vying to be the next in line.

Then one night, after a party described by the few survivors as 'the most exquisite and tasteful ever held! The very end in taste!' a terrified housemaid called the police. Arriving upon the scene, they found all of the overnight guests strangled, some hanging from the chandeliers. All wore around their necks a string of black pearls.

Lili MacCarthy was nowhere to be found.

Anyone knowing the wherabouts of this woman is urged to call crimestoppers! Do not confront this woman unless you want to be the next target of The Necklace Killer! 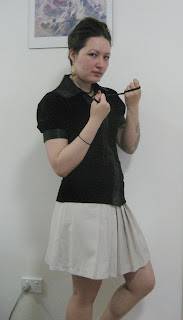 Earrings and necklaces from costume jewellery shop
Top and skirt from opshop.
Posted by Laura Morrigan at 22:09

Email ThisBlogThis!Share to TwitterShare to FacebookShare to Pinterest
Labels: outfits