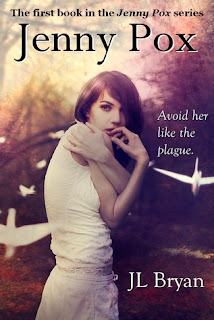 Novel by JL Bryan
(Recommended for readers over 18 on Goodreads)

I absolutely loved this book! There wasn't a dull moment! However, there were moments that made even a fan of Gothic and horror like myself wince.

Jenny is born with a touch that spreads disease, and even kills. The kids in primary school call her Jenny Pox. Later, it becomes Jenny Mittens, and she becomes an outcast, mocked for the long clothes and mittens she wears to protect others from her deadly touch. She lives with her caring alcoholic father, who really does his best to take care of her. I thought the hug masks at the beginning were really sweet and touching.

Jenny has resigned herself to a life alone, until one day, she discovers that a boy called Seth also has powers. Healing ones. He can touch her without being harmed. The only thing is, his girlfriend, Ashleigh, is dangerous, and hates Jenny.

I loved the slow discovery of what the powers could do, and of Ashleigh's increasingly awful schemes. I found the characters well-written. At first Seth seemed like a stupid sex crazed jock, but he soon became a well-rounded character and the reason behind his behaviour with Ashleigh was explained in a very clever way. I enjoyed the far out manipulative things Ashleigh did.

Jenny was well written because she suffered so much, but did not spend too much time dwelling on it and complaining, as characters who have way less problems in their life have done in other stories. I also liked the supporting characters, such as the sweet lady who ran the Five and Dime, and Ashleigh's shyster preacher father.

I thought the story moved just slowly enough to let you know the characters and let their developing relationships seem real, but not so slow that it became boring. I found I believed their relationship, which I sometimes have trouble with in other books.

As I said, it gets quite horrific near the end, and I actually found myself cringing. But I loved that the author didn't hold back, and went the whole way with it.

The explanation was also very imaginative and well-written, I really loved it.

I enjoyed this book from start to finish, it only took me two days to read it, and I barely put it down. In the end, I loved that it was a story about a young girl dealing with destructive powers, and trying to find a place in the world despite unimaginable odds.
Posted by Laura Morrigan at 00:28