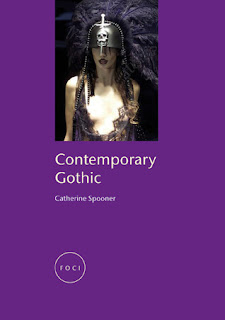 I loved this book because Catherine Spooner does not deny, as some do, the link between the Gothic genre and Gothic culture, nor does she look down upon the latter.

This book looks at a range of topics, from the history of Gothic, through art, literature, film, advertising. It looks at the idea of Gothic as a visually rich culture of spectacle, that challenges our conventional sense of comfort, by challenging our assumptions, and reminding us how far we have not come.

Spooner states that the culture's self-reflexivity as well as it's ability to good-naturedly mock itself is part of what helps it to survive. She looks at how Gothic is consistently reinventing itself to deal with the traumas and the 'emptiness' of our age. I would love to see an updated version of this book including some new additions to issues she talked about, such as consumerism (the rise of gothic toys and entertainment for kids such as Monster High) and the 'danger of the vampire narrative falling prey to its own metaphor and being sucked dry of invigorating life, doomed to replicate itself as an empty cliche' (Twilight taking vampires away from gothic narratives into a simple high school romance setting.) EDIT: Apparently there is another book on the way, Post-Millenial Gothic!

Many interesting books, films and artworks are mentioned. Spooner has a real enthusiasm for her topic, and never stoops to mocking Gothic, rather writing with a sort of affection. I found this book both informed what I already knew and felt about Gothic, and also offered rich new insights.

While Spooner is an academic, the book is not too verbosely written for the normal reader. References to psycology and other theories are explained so that you don't have to know the books yourself. At 165 pages it is also concise, and shouldn't take too long to read.

I recommend this book to anyone interested in Gothic film, literature or culture. Actually, I think everyone should read this!
Posted by Laura Morrigan at 23:57