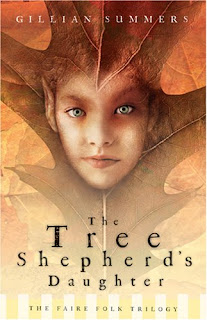 YA novel by Gillian Summers

I did enjoy reading this book, but I was torn between enjoyment and often being utterly annoyed by the continous whinging of the main character.
The premise is fun, Keelie grew up in California with her mother, but after her mother's death, she is sent to live with her father, a woodworker at a Renaissance Fair. I loved the faire setting, which seemed really fun, I would love to visit a place like that. I also liked the idea of Keelie's 'allergy'. The part about the elves and the relationship with the trees were not new to me, but still felt fun and orginal.
For me, the issues was, as I said before, the amount of snarky comments and whining Keelie did. The girl was really hard to like at times. It was frustrating how one moment she would be discovering something wonderful about her identity, and the next she would be yelling at her dad about how she hated him and didn't belong there.
Also there were moments when things felt a little overexplained. I really didn't need to know that Keelie had to take a shower, change her clothes and dry her hair every time she got wet, which seemed to happen a lot. Then at the very climax there was some important imformation which really wasn't explained <spoiler> what was that book, how did it appear, etc </spoiler>  although maybe that will be explained in a later book.
In the end, I think I would give it about 3.5 stars. It was a fun premise, but I really kept wishing the main character would get over herself and have some fun!
Posted by Laura Morrigan at 22:04