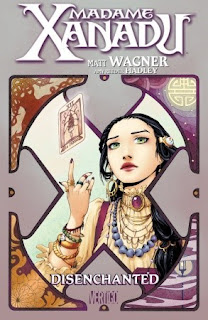 Madame Xanadu began as a mystic character in DC comicbooks. Before reading this graphic novel I had never heard of her before, but this story offers a more than satisfactory introduction. With beautiful illustrations, costuming, and well-written 'voice over' storytelling, this book is a pleasure to read.

The story takes place in iconic times in history: Arthurian England, The Xanadu of Kubla Kahn, the French Revolution, Victorian London under the threat of Jack The Ripper, Depression Era America...

It's also good to see an 'old friend' (I know, I'm a geek for thinking of book characters as friends), Death from the Sandman Comics, that perky Goth girl who is also the wisest and oldest being in the universe. Of course, no one writes her as well as her creator, Neil Gaiman, but I'm still happy to see her cameo in this.

I didn't enjoy the London chapter as much, apart from the outfits, because the whole Jack The Ripper thing is done so often and feels much less fresh and original than the other chapters.

There are a lot of other characters in this from the comics, who I also don't recognise, and I think it would be interesting to know how this story read from the point of view of someone who already knew all these characters, but I don't think you need to know the characters to enjoy it. I can't imagine it being any better than it was, it was fantastic!
Posted by Laura Morrigan at 18:49