I'll Tell You Mine 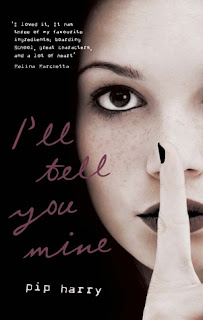 YA Novel by Pip Harry

It's nice to read a book about a Goth character where she can come to terms with the problems in her life and not have to suddenly become 'normal'. She is allowed to have her own identity, and be true to herself.

I really liked the book from the get-go. In some ways, Kate reminded me of my teenage self, in others, she was totally different, but she was a character I could identify with. This line really struck me as describing my sense of difference. 'I was lonely and homesick- the new girl who didn't fit in. I liked creative writing and art. The other girls liked boys, pop songs and doing each other's hair (p142).

This story so perfectly evokes that friction between parents and child when they realise you are no longer that little child they wanted you to stay forever. When they realise they hate the way you dress and the friends you keep, but still can't go of trying to turn you back into that child, not accepting that it is gone, and this is a part of growing up.

I loved so many characters in this. I loved Kate, her cool laid back surfie dad, who encouraged her to express herself how she wanted and gave her great rock and Goth rock music to listen to. I couldn't help but wish he was my uncle or something. I liked the backstories and hidden lives of all the different characters, that were slowly revealed throughout the story. The story unwound at just the right pace. The flashbacks were perfectly placed to give an idea of her home life, but to keep the secrets right up until the end.

I found it a little hard to believe that her parents would give her a 'longer leash', but maybe that's just my own personal experiences with overprotective adults. The whole bush thing really wasn't my scene, but it worked well in the story. I liked the sense of hope and building relationships that it ended with.

I finished this book in one evening, it was hard to put down. I thoroughly recommend it, especially for teenagers. While Kate is a Goth, her struggles are those that are experienced by many teenagers, and I think there is something in her that we can all relate to. There is a little G-Girl in all of us.
Posted by Laura Morrigan at 07:28