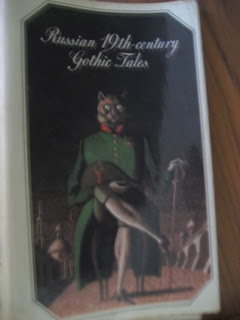 When we think of the Gothic Genre we are likely to think of writers like Mary Shelley and Edgar Allan Poe. These stories show the talent and style present in Russian writing during the 19th Century, and are more than worth a read! I would recommend this book to everyone!
I want to review these stories separately, as they differ a lot in quality and topic between authors.
The illustrations in this story were really lovely and really added to the pleasure and enchantment!
MAY CONTAIN SOME SPOILERS:
THE LAFERTOVO POPPY-CAKE SELLER
Antony Pogorelsky


This story is both spooky and a little whimsical. I enjoyed the bit about the cat. 5 stars.
TALES OF BURIED TREASURE
Orest Somov
This was quite a long short story, containing many stories within a story, and quite enjoyable. I liked all the contained stories as well as the main one. 5 stars.
THE WEREWOLF
Orest Somov
A classic Russian tale of silly youth, intelligent girl and dark magic. Amusing. 4 stars.
THE WITCHES OF KIEV
Orest Somov


This one I didn't really enjoy, not much happened. Perhaps I was swayed by the racism and the crude depiction of witches. 2 stars.
THE TERRIBLE FORTUNE TELLING
Alexander Bestuzhev-Marlinsky
Rather of a cautionary tale, as several in this collection have turned out to be. I did think the superatural bit in the graveyard both spooky and then humourous, which amused me no end. 4 stars. It would have ben 5 if not for the 'it never happened' ending.
THE UNDERTAKER
Alexander Pushkin
A delightfully spooky story. Alas for the frustrating 'it was all a dream' ending! 4 stars. It would have been 5 if not for the ending.
THE QUEEN OF SPADES
Alexander Pushkin
A very original little tale, very enjoyable. 5 stars.
THE RING
Evgeny Baratynsky
Yet again, very original. I loved the story and the denouement. 5 stars.
ANTAR
Osip Senkovsky
A great example of well-written orientalism. The threefold tale is always pleasurable for me and the story was poignant and touching. 5 stars.
UNEXPECTED GUESTS
Mikhail Zagoskin
A faily typical moral tale with devils. 3 stars.
4338 A.D.
Vladimir Odoyevsky
A wonderfully imagined science fiction story! What is now regarded as Victorian Era Steampunk. A real stand out! I adored every second of this and was sad when it ended! 6 stars out of 5!
THE SYLPHIDE
Vladimir Odoyevsky
Interesting, enjoyed references to arcane teachings. I liked the visions he saw and sadness of the ending. 5 stars.
THE GHOST
Vladimir Odoyevsky
The story within a story within a story technique is a little confusing at times. Also I not sure if the ending was meant to be a little unclear. 4 stars.
THE CITY WITHOUT A NAME
Vladimir Odoyevsky
An engaging and convincing rhetoric against the dangers of obsession with personal gain, told as a story. I loved this, as well as the ending that intimates it will not be taken to heart. I think the lessons good ones as well. 6 stars out of 5.
THE LIVING CORPSE
Vladimir Odoyevsky
Another tale about the ways people badly influence others and never learn their lesson but I did not enjoy the humourous style. 2 stars.
STUSS
Mikhail Lermontov
Well written but unfinished.
A NIGHT IN MAY OR THE DROWNED MAIDEN
Nikolai Gogol


It has ghosts but it's not Gothic, it's mostly humour. 2 stars.
THE NOSE
Nikolai Gogol
Absurd and goes nowhere. Really not Gothic. 2 stars.
THE PORTRAIT
Nikolai Gogl
It can be a little meandering in places but in the end all is revealed. A wonderful narrative about the power art can have. 5 stars.
VAMPIRE
Alexei Tolstoy
Dark family history, supernatural adventures and the obstacles both supernatural and human to a love match. 5 stars.
Posted by Laura Morrigan at 03:19