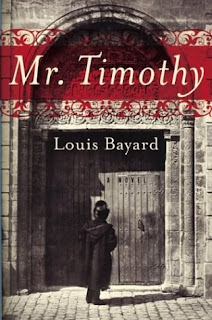 A dark sequel to Dickens' Seasonal, A Christmas Carol, Louis Bayard's novel takes up the story with Tiny Tim grown up, and 'not so tiny anymore'. A tall lanky young man with only a slight limp and pain in the bad leg, he has reached a place in his life where he has no real sense of purpose. He lives in a brothel, teaching the Mistress to read. It is not until he sees a girl running by in the night, and finds the bodies of other, murdered girls, marked with a strange brand that he becomes involved in a mystery, and begins to feel something again.

One of the things I loved about the novel was the sense of disillusionment. In imaginary letters to his father, the now dead Bob Cratchit, Timothy reveals that he never was the fresh faced cherub he was painted as, and the sense of disillusionment he felt when he realised that, despite their wealthy benefactor, he would never become something more, never reach out and become part of some illustrious other world. While their 'uncle' Scrooge is well-off, he has not the riches of a lord or baron, and could make life more comfortable for them, but never really changed their station in life. 'Uncle N' still gives Timothy an allowance, and yet he lives in a house of ill-repute, earning his keep by tutoring a Mistress.

In this story, as in A Christmas Carol, there are ghosts, but they are never definitively real, and seem more the shades of beloved ones we wish we could talk to one last time. Tim sees his father everywhere, in strangers who have some small resemblance to him. I really enjoyed these parts of the story, which were well fleshed out and believable, longing making the dead father almost tangible for Tim.

This novel is a dark one, a novel of the seedy side of London, of the wicked secrets within the hearts of men. It is an engrossing novel from start to finish, peopled with idiosyncratic characters and told with a deadpan black humour. Despite their many failings, there is a deep love for the city and for the characters it holds.

This novel is not for the faint-hearted, as it does involve child trafficking. I liked the secondary characters, with Colin being a little annoying at first, but soon proving his mettle, and Philomela being astoundingly brave and determined. I really found myself caring for them by the end.

This was a wonderful read for me, although heart-wrenching in places, and I thoroughly recommend it!
Posted by Laura Morrigan at 01:59