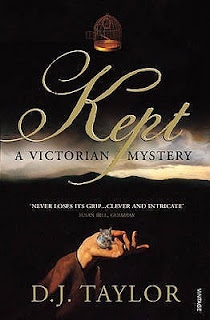 Readers used to a more modern style of writing may find this book a little challenging, but it is well worth persevering!

Kept has a wide range of characters, the connections between which will not be immediately seen, and often uses different forms of writing, such as the epistolatory form of letters which was highly popular during the Victorian Era. It also uses a lot of Victorian turn of phrase, and the style of the omniscient narrator, but sometimes addressing the author personally, breaking the fourth wall, we would say in film. There is also the style common with some older novels, of occasionally lapsing into present tense.

For me, as someone who loves literature and the Victorian era, I found that all these things added to the charm! I really felt like I was reading a novel from the era, and the well-written descriptions and wry humour really helped me become a part of the world. I also liked the mix of events, from crime, to even some rather gothic scenes in the old house. The mysteries of what is going on unravel slowly in a wonderful way.

The author has a great knowledge of all the facts of the era, the artists, authors, newspapers, every detail feels spot on, and I find the references to writers and artists fascinating! He perfectly captures the minutiae of Victorian life in London and Scotland. The book has a very real feeling with palpable descriptions, creating a very real world within its pages.

It was fascinating to watch the stories intertwine as the story reached its conclusion. I must admit, I hoped for a happier ending for some of the characters, even though I knew it was unlikely. The story felt very real, and the endings kept with that. I need to find out which others of the main characters might have been real people, and the author cleverly interwove many real aspects of the time into his work.

The story also deals sensitively with mental illness and its treatment at the time, although, I think, had the character not been of the upper classes, her treatment would have been far worse.

There are so many things I want to talk about in regards to the book, but I don't want to spoil the story, because its unravelling is one of its pleasures. Just take it from me, this book is a must read!
Posted by Laura Morrigan at 16:24