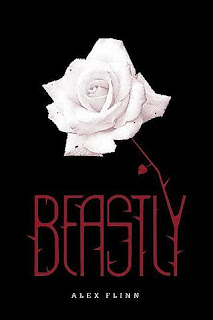 I enjoyed this fairytale retelling because of the lesson it taught, that beauty is on the inside, that beautiful people can be ugly inside. One of the flaws with fairytales (much as I love them) is that so many character judgments are made based on looks. The princess is tall and lovely with golden hair- she must be good! Some stories, like Snow white break this, with the evil queen being beautiful (although not as beautiful as Snow White), but in general good= pretty, bad= ugly. Even in the original Beauty and The Beast, where the beast is monstrous but kind, Beauty is still... well, obviously, beautiful, and the beast becomes handsome at the end. Except by Robin McKinley, where he remains beastly in appearance, but a better person than the man he once was. This always felt more true to me, because if Beauty really learned to love the beast as he was, he could have stayed a beast and it wouldn't matter. Francesca Lia Block's short story in the collection Rose and The Beast also has a similar sentiment. If I had my way, the beast would stay the way he is.

The main thing I would have changed is that Lindy would not have ever been attracted to Kyle when he was attractive, because that makes her seem a little shallow, and that Kendra would not have really been beautiful. I'm all for breaking the witch= ugly stereotype, but I also don't think she needed to be beautiful when the main point of this story is not judging by appearance. Still, I liked Kendra, and I would be interested to read more stories about her. I would have liked it had Kyle stayed beastly looking, but I suppose in modern day New York, you really can't get about looking like a beast.

The other thing I loved about this book was the theme of bad parents. Kyle's father practically abandons him after his change, only hiding him away in a house with servants and everything he needs so as not to ruin his own career by people knowing his son is a freak. Lindy's father gives her to a stranger to save his own skin. In the afterword in the edition of the novel I read, Alex Flinn talks about how the father's abandonment of Beauty to her fate never sat well with her. Why sacrifice your daughter to a beast to save yourself? Of course, in some versions of the tale, she goes of her own accord to save her father, but the result is still the same. She sacrifices her freedom to save her father, not knowing what will happen to her.

I think this theme of bad or absent parents is fascinating both in fairytales and modern day life. Hansel and Gretel are left in the woods by their parents, a man cuts of his daughter's hands to give her to the devil, Snow White's stepmother tries to kill her. In the original tale, it was actually her real mother that tried to kill her. She wishes for the little girl, but then feels jealous of her beauty and charm. A be careful what you wish for kind of tale.

The idea of Lindy's father as a drug addict who is willing to give his daughter to a monster to protect himself is a fitting idea for our modern day society, where we hear stories like this all the time.

I have seen the trailers for the movie, and it seems that
1) Kyle rescues Lindy from muggers, removing the whole bad father storyline I found so fascinating (I may be wrong as I have not had a chance to see the movie)
2) Kyle is not 'beastly' at all. He just looks like a bald kid with some wicked looking tattoos.

I can understand why, when you pick an attractive guy like Alex Pettyfer you would want to show him off, and obviously putting him in a hairy beast suit would not be as attractive, but seriously, I keep feeling he could really just move to some place like LA and everyone would just think he was pretty cool. (Please note my knowledge of LA is based purely on Francesca Lia Block's books and a couple of episodes of LA Ink.) I know a lot of the comments on the Youtube video were about how attractive he was. Not beastly at all. It seems to take away from the story and the moral. It's meant to be a story about a guy who has to become ugly to discover real beauty. And he's still beautiful. It seems like the people who made the movie don't get the lesson.

If anyone knows that there is a good reason why they did this, please let me know.

Anyway, all in all, a good book with a good message. I think if more people could take the message to heart, we could start caring less about looks and more about others.
Posted by Laura Morrigan at 16:53