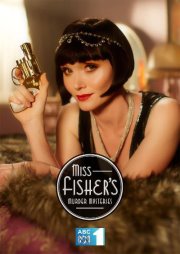 I'm not a fan of crime shows, but I can't help but love the irrepressible Miss Phryne Fisher. From the first moment I picked up the book Cocaine Blues, I was hooked. Phryne is smart, sexy, and bold. She doesn't let anyone tell her what her place is or how she ought to behave. She enjoys luxury and elegant, daring fashions, but she also cares about those in need. She doesn't care for old fashioned values. Instead of marrying and having children she remains independent, has handsome lovers and solves crimes. She has a bright personality that is hard not to love.

The Phryne Fisher books have finally been made into a television series.

I'm up to episode Two of the series. There are many divergences from the original plot, but I am learning to live with things like that, and they mostly work well in the name of working for the television. The part about her sister being murdered as a child is interesting, and I am sure will become more clear later.

I love the lady who plays Phryne. Her acting is exquisite. I also like the way police chief Jack Robinson is written and played in the series. He is a bit surly and spars with Phryne more than I remember in the books, but I like that. The sets and costumes are perfect.

All in all, a very enjoyable series, and one that you should definitely check out!
Posted by Laura Morrigan at 02:30