TV Shows To Check Out: Birds of Prey

If you haven't read the article,'Oracle is Stronger Than Batgirl Will Ever Be', you should really read it. It is a fascinating article about Oracle, by someone who knows her far better than I. It shows what an amazing character Oracle is, and how she can inspire people with her story. 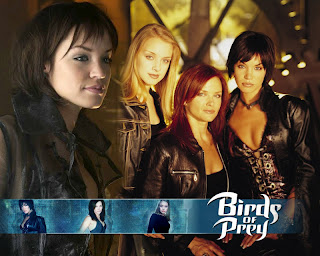 After Barbara Gordon, (Batgirl) was shot in the back by The Joker, paralysing her legs, she became Oracle. She is intelligent, and just as much a hero as those who can still run. She runs the computer network, and still takes on some villains herself. She manages a small crime fighting team while working by day as a teacher, analysing compounds to make antidotes and other scientific stuff, caring for her two young co-heroes who really need mothering sometimes, and trying to fit a relationship into a non-stop schedule. She deals with issues such as her boyfriend's parents not wanting him to be with her due to her disability, and worrying that he is only with her because he feels he needs to protect her. She is strong and capable, although she has moments of doubt, and this new more multifaceted character is truly much more fascinating than that of Batgirl.

Oracle reminds us that disabled people don't want to be pitied but deserve to be recognised for their strength and courage. They face challenges every day, for discrimination to problems with access. If you have ever been on crutches or a wheelchair for a while you will know how much harder it is to get anywhere.

Huntress is a fun character, young, smartass, edgy, with a pile of cool outfits I would love to get my hands on- although I wouldn't actually dare wear most of them. She's a fun character and I really like her, strong, self reliant, a little dark and distrustful and moody. She's my kind of girl.

I like that the main three characters are all women, and the men are relegated to the minor characters. It's nice to see a show really centred on strong women working together. So much media nowadays seems to be about women backstabbing and undermining each other, it's nice to see some positive roles for women.

In the end, most of the plot is the typical kickass superhero action, but with quite a bit of introspective plot involving the personal struggles of the main characters to deal with their demons. It's well worth checking out.