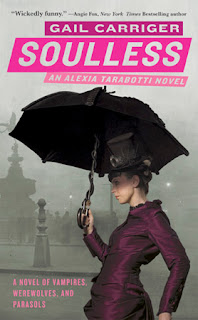 "What if all those strange and unexplainable bends in history were the result of supernatural interference? At which point I asked myself, what's the weirdest most eccentric historical phenomenon of them all? Answer: The Great British Empire. Clearly, one tiny little island could only conquer half the known world with supernatural aid. Those absurd Victorian manners and ridiculous fashions were obviously dictated by vampires. And, without a doubt, the British Army regimental system functions on werewolf pack dynamics."

Gail Carriger. Interview in the back of Soulless.

One of the things I love most about this book is the way it does weave the werewolf and vampire legends into British History. The vampires and werewolves are not hiding in the dark. Two of the queen's main advisors are a vampire and a werewolf. I liked the hierarchies, wolf pack and vampire 'hive' dynamics and the relations between the human and supernatural worlds. I liked the group known as BUR that hired both supernatural and human employees to regulate human-supernatural relations.

Another thing I loved was how she changed the whole soul thing (for want of a better word) around. Instead of having vampires as soulless creatures, vampires and werewolves are actually creatures with 'an excess of soul', and it is 'preternaturals' like the heroine, Alexia Tarabotti, who are without souls. I thought it was interesting that a term traditionally used to describe vampires in the Anne Rice novels was applied to a human in this novel.

As a preternatural, Alexia can neutralise the powers of a supernatural with a touch. I enjoyed the little joking references to things such as Alexia having no taste in clothing because she had no soul.

The romance bit was fun, with some rather steamy making out and neck biting, which is always sexy. I liked the revelation of the villains, I thought it made a lot of sense and went along well with the other themes of the book.

I did feel that Lord Akeldama, as the only homosexual secondary character was perhaps a little stereotyped, being flamboyant and dandified, although he was still likeable.

The story is fairly light, with an enjoyable way of poking fun at society, although it does get a little bit darker at the end when we finally meet the villains. All in all an enjoyable book.