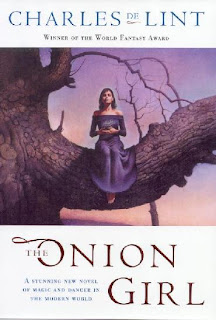 Even if you haven't read any other of the Newford books (I've only read one), I would read this. It has been said you don't really need to read the Newford books in order, and I feel that this one can really stand alone. While the identity of some of the other characters may be a little confusing at first, there is enough information about most of them to be able to get along just fine, and the book mainly focuses on Jilly, telling her story.

The onion girl is a consummate work of magical literature by Charles de Lint. A work told from many viewpoints, in both first and third person, present and past tense, it somehow manages to be both comprehensible and completely enthralling. There isn't a moment where I wasn't drawn in and held there, barely able to escape to eat or sleep. (In fact, once I had made my food, I ate it while reading, being careful not to get food on the book.)

In this book, de Lint has created his own worlds: both that of the town of Newford, a town where magic and grim reality go hand in hand, and the dream world, where creatures of imagination walk alongside ancient beings from the beginning of time. De Lint effortlessly interweaves fantasy elements with the problems of human life.

Jilly Coppercorn is an artist who inspires. Her works show the streets, the homeless people, the abused children. But they also show magic, faerie creatures, she reminds us that magic can be found even in the worst times and places. But Jilly has a dark secret, something she barely speaks of, even to those who she cares for and who care for her, a secret that mars her life every day. Her dark past of abuse. And, sooner or later, she has to face up to that past.

Full of engaging characters, fascinating folklore and creation myth, the harsh realities of abused children, and the possibility of a new start, this book is an amazing work that really defies description. I really can't say too much, I don't want to give anything away, as it is so exciting to figure things out as it all pans out.

Needless to say, this book is a 'six out of five' for me, going well beyond just fantastic into the realms of 'this author is a magician, weaving a web of magic and taking us to another world!!!'

This is the song that apparently gave the book it's name: