Bonaparte Will Eat You... 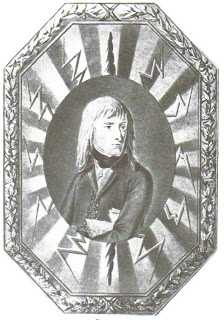 I was thinking about nursery rhymes. I had a huge book of them as a child, and I wish I still had it. There were some more obscure ones that were wonderful, I especially remember the one about Bonaparte, which is kind of ironic, considering he is described as being as tall as a steeple, when he was apparently rather height challenged. It's a great poem, and I managed to find it on this blog: Nursery Rhymes Revealed.

I think it's a lovely poem, but then again, I have always had a rather bloodthirsty taste in poems and stories.

Baby, baby, he's a giant,
Tall and black as Rouen steeple,
And he breakfasts, dines, rely on't,
Every day on naughty people.

Baby, baby, if he hears you,
As he gallops past the house,
Limb from limb at once he'll tear you,
Just as pussy tears a mouse.

"Which is a type of nursery rhyme which hopes to obtain peace by intimidation. Here Bonaparte, as in Napoleon Bonaparte, was used but any character could be used instead. Napoleon was probably used as he would stir feelings of patriotism were stirred in small children, as well as fear, for, when Napoleon blockaded Great Britain, children could no longer have sweets, a source for great sadness for children even then. Other historical figures used included Menshikov, a Russian commander in the Crimean War and Wellington. This rhyme dates from 1836 or earlier.
Credit where due goes to this site  and The Oxford Dictionary Of Nursery Rhymes (edition 2), edited by Iona and Peter Opie."

From Nursery Rhymes Revealed.
Posted by Laura Morrigan at 21:19