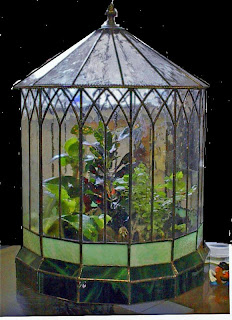 “He had shown Ash, whom he had met previously in Paris, sitting at his desk, in a three-quarters profile, in a carved mahogany chair. Behind him was a kind of triptych with ferny foliage, to the left and right, enclosing a watery space in which rosy and silver fish shone between pond-weeds. The effect was partly to set the poet amongst the roots of a wood or forest, until, as Mortimer Cropper pointed out, one realised that the background was one of those compartmentalised Wardian cases, in which the Victorians grew plants in controlled environments, or created self-sustaining ponds, in order to study the physiology of plants and fishes.'

Wardian cases are what might nowadays be called terrariams. Created by – no surprises here- a physican named Dr. Ward, they provided a controlled environment for the plants or animals contained within. This proved invaluable for bringing specimens back from journeys of discovery. They helped keep plants alive over long sea journeys.

Apparently Dr. Ward first came up with the idea when his ferns were dying from the healthy London air, a surfeit of coal smoke and sulphuric acid. He discovered that some fern spores and grass seeds had sprouted in a controlled container in which he kept moth cocoons, and realised that these containers could be used to protect plant life from the ravages of their environs.

Dr. Ward was also a member of the Worshipful Society of Apothecaries of London, which I really only mentioned because I really like the name. It has a mysterious sound to it, despite actually being a society of physicians, not some kind of secret society. 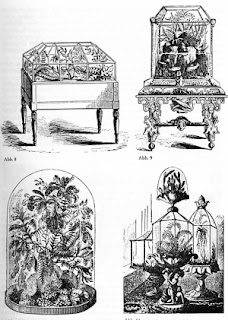 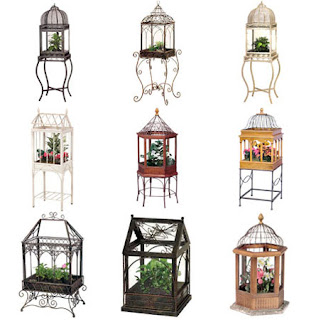