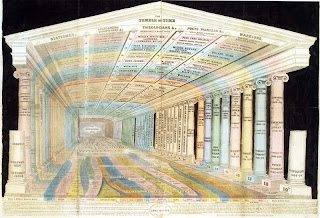 When I was watching Sherlock (ssn2, e2) last night, I noticed that Sherlock apparently applies the memory palace technique, which makes sense, given the amazing amount of things he manages to keep in his brain at one time, and access instantaneously.

I first came upon the concept of the memory palace in a novel, The Season of the Witch, by Natasha Monstert. I don't want to give away too much of the plot, but some of the characters use this memory palace technique to exponentially increase the strength of their minds. A memory palace is basically a series of rooms within your head, where you store information. Generally these are represented by a symbol of some kind. Monstert cleverly interwove these elements into a dark modern fantasy.

I was fascinated by the concept, and when I looked it up, I discovered that it was real. Now I really don't have the kind of analytical, mathematical, map making mind to really attempt a memory palace, nor do I feel the need to, since my primary joys are reading and writing. But I still find it a fascinating subject, and for those who do, here are some links:

(Also, you should read The Season of the Witch. It is a wonderful combination of science and paranormal.)

Wikipedia definition (although the explanation in The Season of the Witch was much better!)

How to Build a Memory Palace

Another version of how to build a memory palace

A blog post from someone who uses the technique
Posted by Laura Morrigan at 21:27