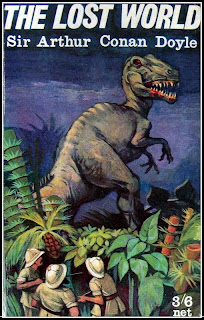 It's  been a long time since I last read The Lost World, probably 10 years or more, so it was about time I read it again. This amazingly imaginative novel, especially for its time- mixes plausible scientific facts with fascinating fictional conjecture.

Alas as an adult, the story is less magical to me than as a child, enchanted by the idea of giant dinosaurs still roaming the earth, but it was still thoroughly enjoyable.

Doubtless this story has inspired countless others, such as the delightful and inventive Dinotopia stories by James Gurney and Michael Crichton's Jurassic Park and Jurassic Park: The Lost World, for which this book is namesake. There are probably countless other references to it in film and literature, perhaps including the pterodactyl in Torchwood.

Conan Doyle shows his intelligence and sense of humour in the writing of this book, such as in his descriptions of Challenger and his temper, which are humourous indeed, the of the rather farcial audience participation in the lecture. I also enjoyed the part where he refers to the native people as not very intelligent, seemingly making a stereotypical comment of the age, only to continue to say 'than the average Londoner', turning it around on his own people, and instead making fun of their intelligence.

The frustrating thing about reading books on a computer screen is the screen is quite bright and hurts my eyes after a while. I also find scrolling down rather frustrating, and I miss the feel of a book in my hands, turning the pages, etc. While it is useful to have free books online, I far prefer having a real volume in my hands!

All having been said, this is a work of genius, and I very much recommend you read it!
Posted by Laura Morrigan at 21:54