A Great and Terrible Beauty 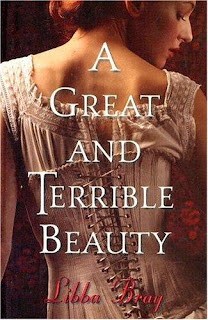 YA novel by Libba Bray

A Great and Terrible Beauty is the story of Gemma Doyle. Brought up in India, Gemma longs to go to England, where she believes she will really begin to live. She gets her with, but in the most horrible of ways. On the day her mother is murdered, she has a vision that terrifies her. Not long after that, she is sent away to a grim English boarding school. It is there that she discovers her talent... or her curse...

An engaging YA novel, this book keeps you interested, and has some lovely descriptions, such as London streets described as looking like an impressionist painting, the beautiful: 'as softly as feathers on our snow,' and ' a small dying star fading out of our constellation', and the darkly tongue in cheek 'a leper without a colony.'

I loved the references to myths and stories such as The Lady of Shalott and The Morrigan, a strong and powerful goddess who I admire. I liked Miss Moore who tried to teach the girls to be strong and intelligent and think for themselves. This book does examine some feminist issues such as the role that that girls are trapped in as women of the time, although not bludgeoning you over the head with them.

I was impressed with the sensitive references to one of the characters self-harming, although I think they made the solution- telling her not to do it- a little easy.

I did wonder, though, why some of the main characters had to be mean girls. They really did do some awful things to the other girls, and I found it hard to like them, despite having sympathy for their situations. I guess the idea was that they develop throughout the story, they did become more sympathetic as the book went on.

I am looking forward to reading the next book, which, unfortunately, my library does not have, so I am not sure when I will get to read it.
Posted by Laura Morrigan at 21:45