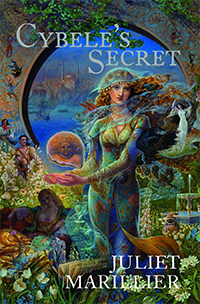 In this brilliant sequel to Wildwood Dancing, Juliet Marillier weaves an enchanting story of magic and intrigue. Set some years after the first novel, the main character of this story is younger sister, Paula, a scholar. Paula dreams of opening her own book business, and is travelling with her father to Istanbul as an assistant. They are looking for an arcane artifact known as Cybele's Gift.  But many others are also looking for it, and there is danger involved. Paula must also undertake her own quest, and travel to a new part of the magical other realm to which she and her sisters travelled in Wildwood dancing.

While this book is certainly good enough to stand on it's own, I would advise reading Wildwood Dancing first, as there are many references in this that will give away the ending of Wildwood Dancing, and it is really too wonderful a story to ruin. This book, while it has a different setting, is also very exciting and magical. It has the kind of flavour of the stories of the Arabian Nights that I loved as a child, but with an independent, intelligent female as the main character, instead of the usual males. There are some interesting characters in this, but I won't give too much away, because I think the character development is an important part of the story. It was also interesting that the story mentioned, not only the lack of rights and opportunities for women in Istanbul, but also in Europe at the time.

The magical elements in this story, as with Wildwood Dancing, felt fresh and original. Juliet Marillier does not write your typical story, she is an amazing storyteller who always keeps me enchanted until the very last page! I am really hoping that there will be a third novel in the series, perhaps focusing on youngest sister, Stela.

This novel gets 6 stars out of 5, brilliant beyond words! A definite must read for adults and young adults alike!
Posted by Laura Morrigan at 03:22