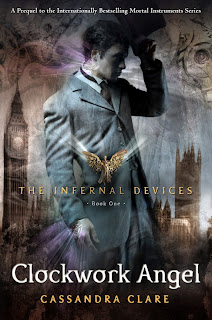 The Clockwork Angel is a Steampunk prequel to Cassandra Clare's Mortal Instruments series. While I did really enjoy the original series (or at least the three of them I read, apparently there is a fourth now) I feel that this book is far superior to the initial series. First of all, I enjoy the use of sarcastic humour on the parts of characters Jem and Will. Their wry comments made me laugh many times and I'm not someone who is really into humour. This made them both likeable, despite their secrets and hidden darkness. Although I loved that too.

I enjoyed the setting. I love things set in Victorian England, but I enjoy the Steampunk element because it allows for strong, emancipated female characters, and anachronistic technology and social mores. Clare seemed to have a good handle on both creating the characters and understanding where their behaviour differed from social behaviour of the time and making the reasons for it clear. For instance, the main character, Tessa was surprised at the familiar way that Shadowhunter adults addressed each other by their first names. I also liked the references to Boadicea, the warrior queen.

Tessa is a likeable character because she is strong and determined. She does what she has to to survive, acting with great bravery and initiative. I also liked the characters of Will and Jem, the possible love interests. Although I feel that one is really put forward more strongly as a love interest than the other. Unlike with Simon in the original series, I liked both the main characters in this. Both had a great sarcastic sense of humour, and they both had darkness and tortured pasts, which always makes characters fascinating. It's that sense of wanting to know their secrets and save them from their darkness that draws you to them. I can't wait to learn more about the past of one of them that has not yet been revealed.

I also liked Charlotte, head of the institute and Sophie, and would like to hear more of their stories, and perhaps the back story of Charlotte and Henry. There is some good steamy romance also, although never getting past the PG level, although there are references to sex (assignations).

There hasn't been all that much Steampunk technology yet, nothing out of the ordinary, and the supernatural elements from the earlier books are still at the forefront of the novel, but I think all the elements in the plotline have been well woven together. As usual with Clare's books, I am much more interested in the interplay between the various characters than the particular plots and machinations of the seedy underworld.

I am currently on the library waiting list for the next novel, and very much looking forward to it.

When I was googling an image for the book cover I also found a picture of this amazing girl and her Clockwork Angel costume. Check out her DeviantArt account. 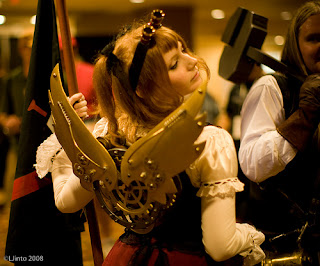