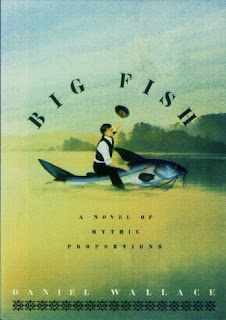 A novel by Daniel Wallace

Edward Bloom is dying. His son doesn't know him very well, Edward has spent much of his life travelling, doing business, trying to become 'a big fish in a big pond'. Now he is dying, and almost all his son knows of him is the tales his father has told, tall tales of his youth and childhood. When these stories are all he has left, are they the only father he will ever know? Is the truth less important?

The novel of Big Fish is, in my opinion, much better than the movie. While the movie was an adventure, it was more entertaining most of the time than insightful. The book is really more about the son of this man trying to reconcile his father's different characters: the hero of his childhood versus this weak, dying old man, and his father the storyteller versus the real man he never really knew.

His father's life as he know it is a mixture of truth and legend, although, we are never sure how much of it is truth. Who is the man behind all these tall tales? Does it really matter? We see glimpses of what seems like reality between all the tall tales. Tales the father tells seem to reveal his life, and then end up just being a joke. It is clear to see the son's frustration at his father's inability to open up, but in the end, I think, he accepts that his father is the way he is, and cannot be any other way. And I think, also accepts that his father is a part of him, and has made him the person he is.

In parts sad and poignant, in others ridiculous or magical, Big Fish, is, in the end, a tale about the relationship between a father and a son. It is the tale of a man who might have never existed, and the son who loves him.
Posted by Laura Morrigan at 21:03