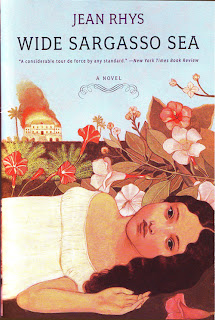 This was an excellently written novel, but I felt so sad throughout it that I was unable to enjoy it at all.

Wide Sargasso Sea gives us an insight into the tragic life of one of literature's cruelly overlooked characters, Mr Rochester's wife, dismissed as mad, as a dangerous insane creature who keeps him from his true love Jane and attempts to murder him.

In Wide Sargasso sea, we are allowed a glimpse of Antoinette's tragic childhood, her brother's death and her mother's subsequent madness. The sensitive, lonely child is sent to a convent school, until such time as it is decided she should be married off. A young gentleman from England, a fortuneless second son marries her for her money. Having no love for his wife, Rochester soon believes tales of her madness and begins to see her in a different way. His change of behaviour to her, and harsh lack of love is what begins to drive her mad.

I pitied Antoinette. While Jamaica must have seemed like a wild and frightening country to the English at the time, and while mental health was not understood in those days, it is so clear how his behaviour damages this simple, childish girl, who has come to love him. He is all she has in the world, having no family, and the only other person, her maid, Christophine, he drives away.

This book left me with a lingering sense of melancholy and a strong desire to punch Rochester in the face.
Posted by Laura Morrigan at 17:45