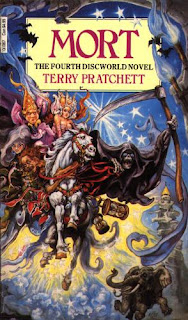 I can't help but wonder how different my reading list and my own writing would look now. Everything we come into contact with changes the path we take just a little, and I always think I would love to look back and see what might have been down different branches in destiny. Of course, it's probably better not to know.

When I was maybe ten years old, I had a choice to get either a Terry Pratchett book or another one, I cannot now remember what it was. I got the other one, it must have been something that really interested me at the time. And somehow, it has taken me until now to read one of his books.

To be honest, I think I was rather put off by the fact that they were meant to be funny, and often books that try to be funny leave me cold. I could not have been more misinformed. Mort is told with a wonderful dry wit that sometimes borders on sarcasm, the kind of style I can really enjoy. Not to mention historical and social references with that same deadpan humour. I liked the intelligence of the jokes, Pratchett is not an author that talks down to you. I also enjoyed some of the little rewritten quotes, such as Samuel Johnson's 'when a man is tired of London, he is tired of life', rewritten as 'when a man is tired of Ankh-Morpork [the city], he is tired of ankle-deep slurry.'

I read this book in a bit under three days (not counting eating, sleeping, leaving the house, etc. of course) and throughly enjoyed it.

The story is about Mort, a young boy who is apprenticed to Death, and his following adventures. The characters are refreshingly flawed, being neither ridiculously good looking, as you often find in stories at the moment, nor superhuman, they make mistakes and get cross, just like everyone else. This makes them more relatable, despite the fact that things happen to them that never seem to happen in our peaceful and much less chaotic universe.

SIDE NOTE: The subject of a character's attractiveness or unattractiveness is one that interests me, especially with my own writing. When I describe my characters, I struggle to find something that is not beautiful about them. I don't exactly believe in idealising all my characters, but I don't believe in judging people by their appearances, nor do I find anything ugly in everyday people. Well, except a bad temperament, and that is internal, not external. Am I too unjudgmental?