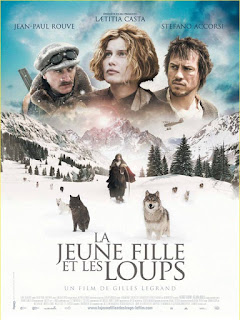 I just watched the film The Maiden and the Wolves. It was a really beautiful film, one of those it is a real pleasure to see. I can be really picky with films, but this one left me feeling fulfilled and also a little melancholy. I like films that make me think and feel, I believe that's a mark of a good film, and this one made me do both.

As a child, Angele and her brother rescued a wolf cub. Later on, as an adult, she is determined to become the first woman veternarian, but her efforts are met with ridicule. She eventually convinces a rich man (I think he was a baron) who catches wild animals for menageries to take her with him. During a fly over the mountains near her home town to see the wild wolves the plane crashes. Alone in the night, Angele is rescued by wolves, and by Giuseppe 'the looney' who lives out in the mountains with only the wolves for company. Giuseppe may be simple and strange, but he shares a wonderful natural bond with the wolves. But fear and progress threaten the lives of the wolves...

There are often references in literature to characters who are seen as 'simple' or crazy. In one of Algernon Blackwood's stories, The Touch of Pan, an 'idiot girl' introduces the main character to a secret world of nature and ancient gods inacessible to those who have lost touch with the earth and the natural way of things.

Of course, semi-wild children who have grown up among animals is a popular theme in stories, Mowgli of The Jungle Book, and Romulus and Remus of the Roman legend being among the most famous.

I was reminded of a movie I saw a long time ago as a child, Never Cry Wolf. It was based on a book of the same name, recording the true story of Farley Mowat, who spent a year in the Canadian wilderness. He was meant to be researching the threat of the wolves to caribou, but instead learned that they were not wanton killers, but amazing creatures. He came to learn more about them and understand their true value.

I thought the actors were all well cast. Angele had a rather unreadable expression, while her intelligent dark eyes said all that she could not say about her feelings of being trapped in her life. Giuseppe did seem a little crazy at first, but, like Angele, we got to see through his unkempt and not very handsome exterior to see a gentle, kind man who is in touch with the wild things of nature. The mayor was pompous, self-involved and, later on, rather menacing.

In this film, we see people using others to get what they want, such as Angele's father making her pose for a statue, and trying to make her give up her dreams to nurse a sick old man, and worst of all, the way the mayor uses his father's illness to do what he wishes. The animals and Giuseppe, on the other hand, live simply, without trickery or lies, and help each other without question.

One of the things all these stories remind us of is the beauty of nature, and mankind's wanton destruction of it. It reminds us that we need to tread gently on the earth, and try and take care of those animals that are left, for if they are gone, our world will be a much poorer one. 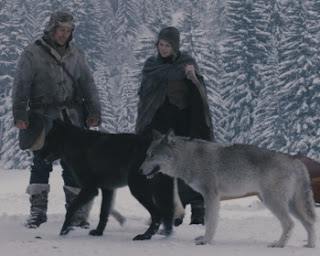 Other films about wolves:
Dances With Wolves
Never Cry Wolf

If you know another other good ones let me know and I'll add them to the list.
Posted by Laura Morrigan at 20:55